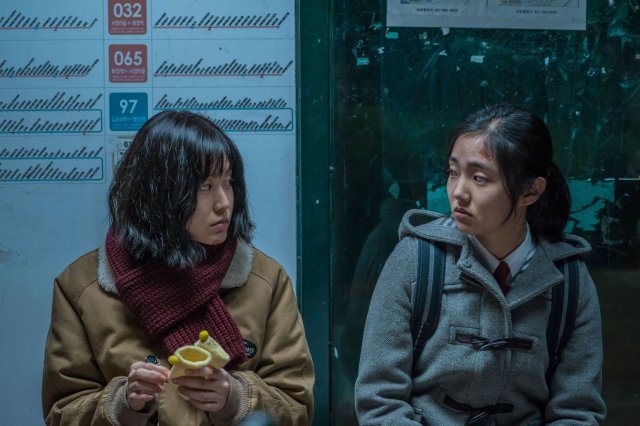 In the opening scene to "Another Child" we see teenage girl Joo-ri (played by Kim Hye-jun) sneakily peering in at a house party. The mother of the house, Mi-hee (played by Kim So-jin) asks her own teenage daughter Yoon-ah (played by Park Se-jin) what the deal is, and if she knows that other girl. Yoon-ah says not really, and they don't know each other that well, but we soon see that fate has forced these two increasingly crabby girls into a family situation neither one of them wants.

More than anything else "Another Child" really nails adolescent agitation at their parents. Yoon-ah in particular has no illusions about Mi-hee. The older woman doesn't much act like a mother at all. We can see Mi-hee swooning over her love affair with Dae-won (played by Kim Yun-seok) like she was a teenager, waxing romantically over her unborn child while doing precious little to be a parent to the daughter she already has.

I loved Yoon-ah's survival instincts. Sure, the girl can be vicious, and at times even uncalled for with her behavior to Joo-ri. But it's easy to see why Yoon-ah has such a hard bite, growing up with parents who can't be trusted to so much as put food on the table. Joo-ri initially resents Yoon-ah for fomenting the film's crisis, but slowly grows to respect and trust her fellow student realizing that they quite literally have the exact same problems.

Yum Jung-ah also puts in an exceptionally strong performance as Yeong-joo, Joo-ri's mother, even though her character is quite tertiary to the narrative. Indeed, that's why Yeong-joo shines so much as a character. She's the movie's sole responsible adult, and is frustrated to realize that her very boring dedication to taking care of her family has made her a bit of a doormat. When a disgusted Yeong-joo finally figures out what the plot is, she impulsively, minorly lashes out- and then proceeds to feel horrific guilt for the rest of the film for her sin, culminating in a brutal confessional scene.

Until now writer/director Kim Yun-seok has worked primarily as an actor. This isn't surprising because the performances in "Another Child" are amazing, giving serious dramatic heft to a plot that in literal terms feels like something out of a soap opera. I was especially impressed by how sharp and accurate the female perspective is here. While Yeong-joo tries to be perfect, all the other female characters are intrinsically flawed. The teenage girls especially realize that they're flawed, and are struggling with overcoming those flaws before they hit adulthood via a healthy dash of romanticism.

Emphasis there being on healthy. In one particularly goofy moment the token male in "Another Child" attempts to run away and find himself, or something, and soon finds himself on the wrong end of a petty dispute involving obnoxious locals in the beach town he tried to run off to. The man's a pitiable buffoon. Sometimes this makes him a good dad. But unfortunately, that's what being a teenager is all about- realizing that a good dad isn't necessarily a good person.