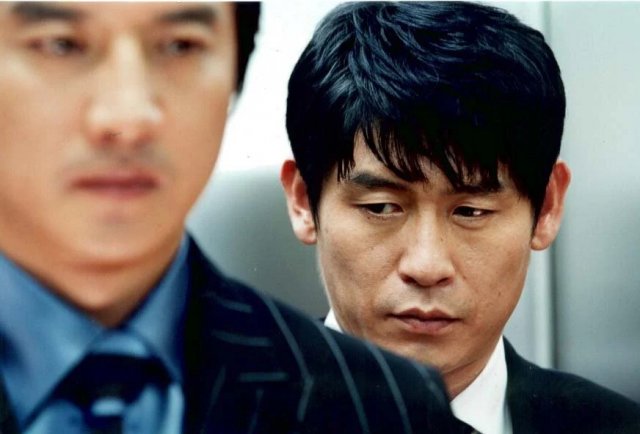 The first "Public Enemy" movie is a genuine classic of South Korean film. In it Officer Kang (played then and now Sol Kyung-gu) hates working through the system, preferring to menace and beat up suspects until they confess. Officer Kang doesn't do this because he's a good cop who feels that red tape is letting crime run amuck. Officer Kang's just really petty and lazy. His apt and comical arc is that he learns how to do paperwork because some jerks are evil enough that it's worth the effort.

Officer Kang is a brilliant satire of the rogue cop trope that remains popular to this day. So it was with some disappointment that I finally got around to watching "Another Public Enemy" and realized that the movie consists almost entirely of Officer Kang, now Prosecutor Kang, doing endless paperwork, none of which ever gets him any closer to solving the crime. Prosecutor Kang is only finally able to make the arrest because his nemesis makes a very pointless unforced error.

Over and over again in "Another Public Enemy" Prosecutor Kang just goes to meetings, tries to convince people he needs help to catch the movie's corporate crook, and just gets pathetically blown off. There are also different, equally boring meeting scenes where other characters discuss nothing and accomplish nothing. Consequently Sol Kyung-gu is almost unrecognizable in his new role as a guy who just goes to meetings and tries to avoid getting mad when people find polite convoluted ways to tell him no.

"Another Public Enemy" lacks the charisma and distinction of the first film. But worse, "Another Public Enemy" completely undermines the satirical message of the first film by making the uncritical statement that all cops are good and that laws only benefit criminals. Even the villains of the respective movies are swept up in this. Where Lee Sung-jae was a frustratingly aloof sociopath with friends in high places Jung Joon-ho is so generically unlikable it's little surprise his support erodes under very cursory evidence.

I'm also reminded of Jung Jae-young from "Public Enemy Returns" who proved a suitable foil for Prosecutor Kang because they were both petty in similar ways. In general "Another Public Enemy" is caught in a very awkward place between these movies. "Public Enemy Returns" had some flaws with rhythm but had definite satirical bite. I can only fault screenwriter Kim Hee-jae for these drastic flaws, given that aside from her the other two films in the trilogy had mostly the same staff.

But can you really call a film series a trilogy, when it wasn't planned out that way and the sequels were obviously only made due to the bankable brand name? Even bearing in mind that's why most sequels are made, the sheer lack of understanding as to why "Public Enemy" was such a big hit really agitates me here. There's just not much to praise here- the only halfway interesting scenes are where Prosecutor Kang is depressed enough from his failure to make progress at boring meetings that he stumbles around drunkenly for a little bit.