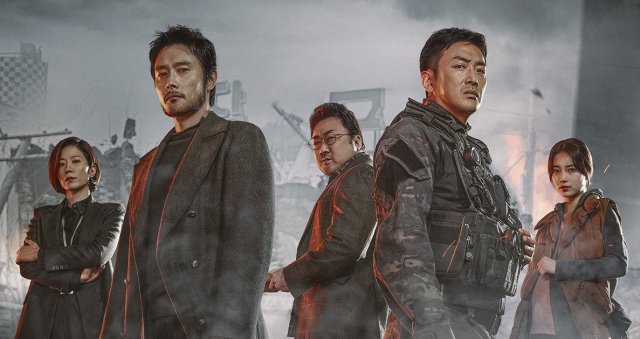 The opening scenes to "Ashfall" move fast. Military tough guy In-chang (played by Ha Jung-woo) is stuck in traffic while his wife Ji-yeong (played by Bae Suzy) visits the obstetrician alone. Out of nowhere a massive earthquake hits. The Seoul cityscape is ripped apart in glorious fashion. Then government manager Yoo-kyeong (played by Jeon Hye-jin-II) pressures geologist Bong-rae (played by Ma Dong-seok) to come up with a generally bonkers plan to use North Korean nuclear weapons to prevent the remaining devastating aftershocks.

At that point "Ashfall" abruptly and bizarrely turns into a completely different kind of movie. You'd think setting off a nuke underneath an erupting volcano would be a challenging enough task on its own, but instead In-chang and his borderline incompetent team of special operatives end up spending most of the movie getting into gunfights with three different armies. By the time they get to the titular Mt. Baekdu, the danger of flying volcanic rock chunks seems like a total afterthought.

The beforethought being a deeply creepy road trip wherein In-chang surveys post-apocalyptic North Korea. None of the actual characters are quite so crass as to fondly remark that it's fortunate the North Korean regime was apparently destroyed without South Koreans needing to get their hands dirty. Yet the film's directing unavoidably makes this implication. Matters are not helped by the token North Korean character Joon-pyeong (played by Lee Byung-hun) acting like a generally untrustworthy and dangerous psycho even as he inadvertently repeatedly saves the lives of his South Korean counterparts.

"Ashfall" inspires so little confidence in the ability of the military strike team or the government to do anything right that at times the movie almost feels like a satire. Unfortunately, the overbearing musical cues make it very clear that moments of intentional comic relief are few and far between. Generally pointless betrayals that do nothing but artifically extend the movie's running time pop up every twenty minutes or so, accomplishing nothing but encouraging me to ask myself, when are they going to get to the volcano?

The most discouraging part of "Ashfall" is that the effects are genuinely excellent and in a theater environment, even scary. The sense of constant foreboding horrific doom on the bridge scene is another great moment, even it ends with a cheat by not showing us how the relevant main character managed to escape the car. And on that note, it's not at all clear to me why the casting department felt the need to cast four major stars here, given how everyone save for Ha Jung-woo and Lee Byung-hun is completely superfluous.

Not that Ha Jung-woo or Lee Byung-hun are necessarily any more integral here. "Ashfall" is a few extremely strong scenes of pure destructive special effects spectacle sandwiching very long very boring stretches of its characters running around in circles, sometimes quite literally, in order to avoid actually solving the main conflict. While obvious clichés alone would be forgivable, atrocious editing and an overly long running time turn "Ashfall" into a disaster of a disaster movie.