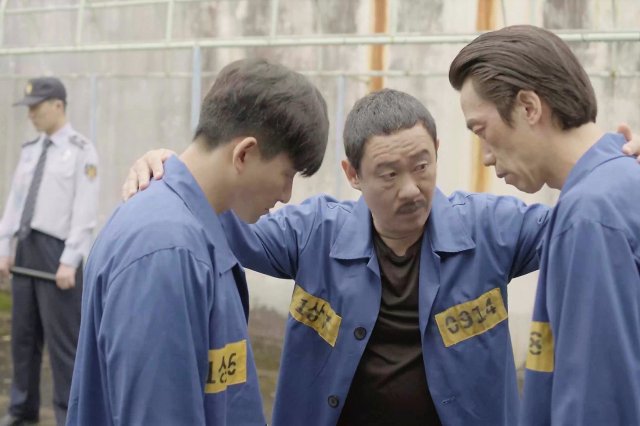 Despite "Asurado" being promoted as a fairly basic prison genre film I was pleasantly surprised by the first act, which defies quite a few tropes and stereotypes about prison management. In short Hye-myeong (played by Lee Won-jong) is a very friendly and reasonable warden. But his dumb prisoners are always getting into fights and making a mess. So Hye-myeong improves relations by bringing in notorious supercriminal Tae-sik (played by Lee Sol-gu), and nicely asking him to behave himself to set a good example for other prisoners.

The incredible part of this plan is that it actually works. The improved communication between the prison guards and the prisoners themselves leads to a decided decrease in machismo. Rehabilitation is happening, and it's working! Then, with the only apparent conflict solved, the new warden Pyeong-ho (played by Jang Gwang) enters the story. And we know that this guy has to be bad news since otherwise there's not much else for the characters to do.

And at that point "Asurado" loses a lot of its appeal, turning into a pretty standard low budget prison movie. Well no, that's not fair, I think "Asurado" is actually a pretty exceptionally low budget prison movie, with "exceptionally" modifying the words "low budget" in that sentence. The sound quality is quite dubious, and the prison itself feels terribly small simply because no one bothered to hire extras for the larger scenes.

The more intriguing bit of cost cutting is how "Asurado" shares both its filming location and its lead actor with "King of Prison" from last year. I'm actually halfway convinced that "Asurado" had its genesis in outtakes and deleted scenes from "King of Prison" simply because Lee Sol-gu has surprisingly little screen presence here. Even more suspiciously, he almost never speaks directly to other central characters, somehow managing to go through the entire climax without personally taking vengeance on Pyeong-ho, instead picking a fight with a bunch of people we'd never even seen before.

And this is a pretty big problem, since Lee Sol-gu's unexpectedly good performance in "King of Prison" is what elevated the flick to being far better than it had any right to be. "Asurado" by comparison is a case study in how the same actor doing almost the exact same role can come off much less charismatically if the director just isn't doing a good job utilizing his talent. Hye-myeong comes off as the real hero of the movie simply because he has an actual arc and motivation beyond just being kind of depressed all the time.

I have no illusions about why "Asurado" was made. It's cheap scripted action with vaguely recognizable stars, a clear premise and an incomprehensible title that vaguely resembles "Asura: The City of Madness" so maybe you have vague positive feelings associated with it. Still, I found myself thinking, I'd like to see a movie where Lee Won-jong reforms the entire penal system using just the power of his winning smile. I wonder if he did enough outtakes for "Asurado" to make that project a hypothetical possibility.