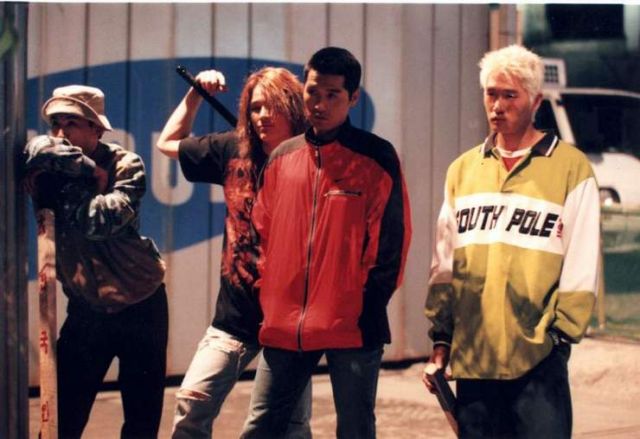 The first images we see of "Attack the Gas Station!" are highly abstract. We see the gas station being attacked. But who would do such a thing, and why? Rather than tease out this mystery director Kim Sang-jin almost immediately gives a very blunt non-reflective answer. Everybody was bored and there was nothing better to do. The situation is further confused by the gas station attacking thugs deciding to stick around for awhile and terrorize the gas station's owners in the name of...justice?

Twenty years later "Attack the Gas Station!" is an odd relic. It reads like a satire of modern pretentious criminal thrillers. The joke here is that while the main thugs like to think that they're smart guys, they struggle with trying to find convincing rationalizations for their actions. What's more, they keep forgetting to double check the many ways their non-plan could go horribly wrong, the implication being that massive disaster is imminent.

But here's the weird part. The imminent disaster never actually happens. Even though the gas station thugs are constantly making new enemies unnecessarily, said enemies are at best just other thugs. One particularly surreal sequence involves smug police officers who think they're above the standards of regular people, and have to be bullied into behaving like decent upstanding members of society. That one of the violent thugs is the one dispensing this moral lesson is the obvious irony at play.

Note that while I keep calling them thugs the main characters are for the most part sympathetic. That's another one of the odd ironies. Even though they're clearly dangerous, they don't act dangerous. They yell a lot, but never get all that angry. Scenes of gratuitous smashing are oddly restrained and utilitarian. Regardless, the thugs enjoy every minute of action and appear to spend the entire movie riding on an adrenaline high straight into the sunrise.

Is this supposed to be wish fulfillment? It's kind of hard to say. What makes "Attack the Gas Station!" so distinctive is that all its characters are obviously human. Even bearing in mind that the characterization for most of them is that they're easily provoked and generally rude...well, weirdly enough, that's the main point of continuity and identification. These petty interpersonal conflicts are what allow the characters to find meaning in life, because struggle in the named of vaguely complicated long-term goals is what makes humans different from other animals.

Of course, analyzing "Attack the Gas Station!" at all feels a bit self-defeating. This is the kind of movie you watch over chicken and beer, where the individual scenes don't matter, because everything is playing out like a skit. The prompt? What if that guy filling your gas wasn't just a meek minimum wage employee, but was willing to call you out on being a jerk? And what if gas stations worked way, way different than you had ever thought? It's all an amusing thought experiment, but given how goofy the jokes are in execution, those concerns are very secondary.