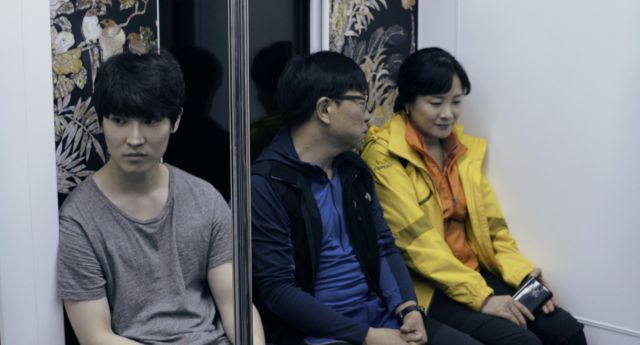 While "Autumn, Autumn" premiered at the Berlin Film Festival back in 2017 and apparently even had a limited release in the United States shortly after, it was only last month that the film finally received a domestic release in South Korea. The success off "The First Lap" probably has something to do with it- writer/director Jang Woo-jin-II did a lot of production work for that generally well-regarded film. As for "Autumn, Autumn" though, I'm not actually sure what this movie is even about.

Save for the very weak framing device of both of these stories originating on the train, there's no interaction between the two, not even in terms of editing. We just watch one short movie and then watch another short movie, both of them centered around the theme of Chuncheon being an inherently depressing and lonely location. The very humdrum problems the characters have are largely emotional in nature, and never get any closer to resolution regardless of how many endless conversations about nothing are had.

And I really do mean endless conversations about nothing. I struggle to recall what anyone in "Autumn, Autumn" was ever actually talking about. A late scene wherein Ji-hyeon makes a dramatic, drunken phone call almost comes off as interesting, but even that's more because of the inherently sad backdrop of the scene than it is the actual topic of conversation. In this moment Ji-hyeon comes off as endearingly pathetic- which isn't much, but up until then the young man had just come off as pathetic.

I can't even muster up that much sentiment when it comes to Heung-joo and Se-rang. They have this weird quality of looking and acting like a married couple that has slowly been absorbing each other's personality traits over the years, except that they're not actually married. I have to admit that writer/director Jang Woo-jin-II at least has a novel approach to philandering in that regard- it's just a way for boring people to pretend like they're not boring, for a spell.

While that idea is somewhat intriguing, in practice "Autumn, Autumn" is every bit as horribly dull as its largely unremarkable characters. They only really work as ciphers for viewers who have had similar life experiences, and unfortunately (well, fortunately is probably the better way to put it) I couldn't relate to anything that was happening. For that matter, I also like Chuncheon. It's pretty and snowy. Why does it keep getting typecast in movies as the land of hopelessness and despair?