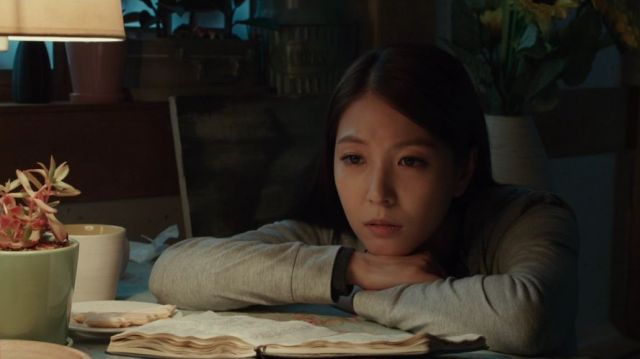 Soo-ryeon (played by BoA) is a thirty-year-old postal service worker in rural Gyeonggi Province. The most effective moments of "Autumn Sonata" tend to focus on that backdrop. Director Lim Wang-tae's imagery is so vivid it frequently feels like we can taste the fresh air. This is Soo-ryeon's ancestral home, after all, and while the endless empty scenery is at times lonely, or at least mostly filled by old people, there is also a powerful serene sense of inner peace.

At least, that's what it's like when Joon (played by Lee Hak-joo) is not on-screen. His character is problematic, because he kinds of acts like an obsessive creepy stalking ex-boyfriend. It turns out that Joon is not, in fact, so awful as he seems, but I was nonetheless extremely confused as to why the exposition for Soo-ryeon and Joon's backstory is handled so late. Up until those flashbacks, Joon came off as such an abusive person I was most definitely not expecting Soo-ryeon to accept his love confession.

Placing the scenes in this particular order was a rather puzzling editing choice on the part of the production team. The main issue is that it confused me into thinking that maybe "Autumn Sonata" was not a melodramatic romance, as I had been led to believe. But then what else could it be? What other movie would prominently feature a woman happily retreating into an idyllic country lifestyle with little thought to her future?

Another vital pleasantry is the supporting cast, many of whom personally knew Soo-ryeon's father, who also appears prominently in flashbacks. The father-daughter bonding scenes are another very strong highlight, bringing up feelings of country nostalgia. We learn that Soo-ryeon's father instilled in her a powerful appreciation for science, cause-and-effect, and generally just the importance of being able to love yourself and be together with someone who loves you for that.

None of this is all that important to the actual plot, which as is typical for romantic melodramas, is fixed to a rather predictable trajectory. The appeal of the overall journey is that Soo-ryeon's life story, played out as it is in flashbacks, is meant to provide the strongest possible statement as to the kind of person she is. Thus, when Soo-ryeon meets the inevitable fate of all mortals, we are naturally sad, yet happy that Soo-ryeon was able to live that life on her own terms.

But where does Joon come into this? He doesn't really. That's the whole problem. Soo-ryeon jerks him (and by extension us) along for the whole movie by refusing to give him an explanation. So his best scenes aren't the ones with Soo-ryeon but, of all things, the comic relief moments where we see him working at the crematorium. In retrospect that would have been an almost perfect setting for Joon to ruminate on mortality, which makes me wonder if director Lim Wang-tae and screenwriter Kim Jeon-han were working at cross purposes, neither really understanding what the other was trying to do.