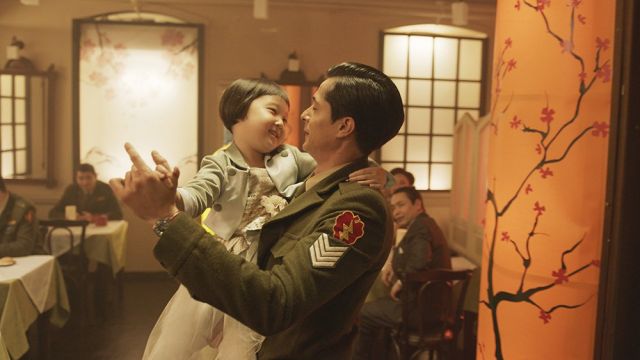 Süleyman (played by Ismail Hacioglu) is a Turkish dandy hanging out with his buddies in Istanbul in late 1950. They decide to enlist to fight in the Korean War for nationalist pride. Why it would be patriotic for Turkish men to volunteer to fight in a random civil war on the opposite side of the planet is not discussed. Nor is it especially relevant. After some token scenes establishing that the North Koreans are indeed evil "Ayla: The Daughter of War" moves on to its core concept- the relationship between Süleyman and Ayla (played by Kim Seol), a young war orphan.

Initially Süleyman is drawn to Ayla by mere humanitarian sentiment. He can't just leave a five year old girl on the side of the road in the middle of a war. But as the timetable for Turkish withdrawal keeps getting pushed back, Süleyman truly starts to bond with Ayla. She's a constant reminder of what's worth fighting for in the world. Through sheer emotional grit, Süleyman becomes her father in less than ideal circumstances.

"Ayla: The Daughter of War" is unbearably cute. Yes, we've got the brutal war scenes at the beginning, and the equally brutal timeskip at the end. But director Can Ulkay correctly recognizes that the main part of the Ayla story that's compelling is its universalist statement on human nature. That a Turkish man could feel so strongly about a Korean girl to stubbornly insist that she's his daughter through thick and thin is a strong message of shared humanity with no borders.

Where the drama comes from is that real world politics does not line up with this humanistic vision. There's a bitterly ironic plot point about how Ayla must be placed in an orphanage while Süleyman is legally prohibited from adopting her. A few years after this event, the South Korean government's official policy regarding war orphans was to export as many of them as possible- which would of course, be far too late to be of much help to either Süleyman or Ayla.

So what we're left with is an encouraging story in the middle about people trying to do the best they can in bad situations. There's this constant specter of mortality coupled with an unwillingness on the part of the young idiot soldiers to appreciate just how dangerous their situation is. The infectious optimism provided by Ayla is the main thing that keeps them going. Even in memory Ayla provides Süleyman with the persistence necessary to move on with life.

Both Ayla and Süleyman are real people by the way. Wait until the credits and you'll get to see real life footage of their actual reunion. Even bearing in mind that "Ayla: The Daughter of War" is a Turkish melodrama intended chiefly for that audience, it's hard not to see the parallels to the evolving peace situation on the Korean peninsula. It is never too late to right a wrong. Think positively and just hope that the day you are dreaming of will soon arrive.

"Ayla: The Daughter of War" is directed by Can Ulkay and stars Kim Seol, Ismail Hacioglu, Lee Kyung-jin, and Ali Atay.

"[HanCinema's Film Review] "Ayla: The Daughter of War""
by HanCinema is licensed under a Creative Commons Attribution-Share Alike 3.0 Unported License.