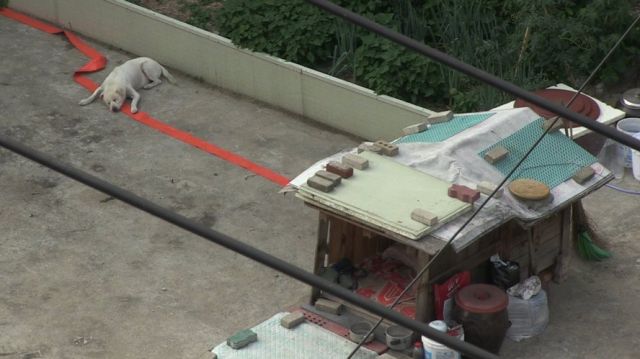 Once upon a time, in an obscure part of Seoul, there was a dog called Baek-gu. He came to the area as a medium-sized white puppy. He would just run around and do whatever, sticking around because there was an old man who gave him food. Then the old man went away, and by then Baek-gu was old. He became haggard and scrawny. This neighborhood was no longer the kind of place where people noticed or cared about stray dogs, not that it ever really was in the first place. So one day, Baek-gu finally died.

Baek-gu may not have been a shaggy dog although the above synopsis is a pretty good example of a shaggy dog story. Which begs the question- why did director Kim Bo-ram feel the need to make this documentary in the first place? I'm far from the first one to ask it. The documentary itself contains numerous scenes where people respond to director Kim Bo-ram's queries about Baek-gu with a puzzled "why are you making a movie about that dog?" reaction.

Well, the answer to that is because the documentary really isn't actually about the dog at all. Rather, its exploration of current normal daily life in South Korea, using Baek-gu as a conversation starter. This is most obvious in the increasingly abstract and disconnected imagery throughout the second half of the film, which veers from major political protests to director Kim Bo-ram's own difficulty in finding affordable housing in the current real estate climate.

These events don't have much obvious connection with each other, let alone Baek-gu, although the key word there is obvious. Baek-gu is symbolic of how South Korean culture has gone from being something accommodating to those who live there to one that is increasingly indifferent and uncaring. Mind, it is at times difficult to tell whether this is a fair assessment, since a lot of the people interviewed pretty obviously just don't feel like talking on general principle.

Other places, namely the brief spots with kids, are more authentic. Then there's a section where Kim Bo-ram just tries to talk to random old ladies. She is at one point violently interrupted by a social worker who is quite adamant that random old ladies are not to be talked to. This is emblematic of how the logic and reasons behind rules in modern South Korea have become increasingly irrelevant. Stuff just happens, without explanation.

Which is in all fairness a perfectly reasonable critique of the documentary writ-large. The whole thing is just a giant run-on sentence. We start out, literally, with just an extended shot of the wind ruffling the trees, and director Kim Bo-ram frequently just seems interested more in general photography than she does anything resembling any kind of a relevant point. Still, as either a political piece or an experimental piece, she does get the job done, which is why the film has gotten around quite a bit on the local festival circuit. Whether anyone outside of Korea will get a chance to see this movie is a more ambiguous question.

"Baek-gu" is directed by Kim Bo-ram