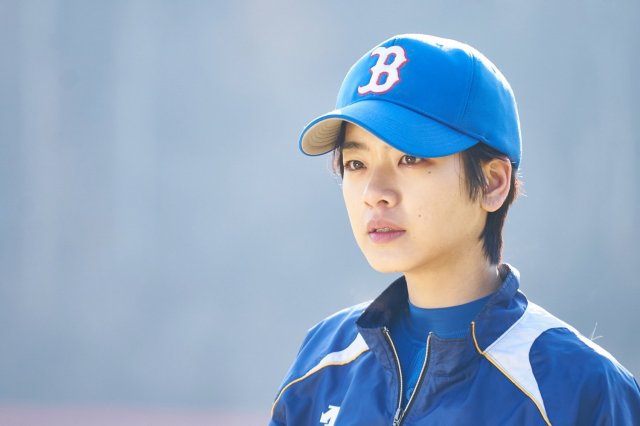 Soo-in (played by Lee Joo-young) is a high school baseball player who wants to go professional. But where as a middle school student Soo-in was hailed as a genius pitcher, in high school age she has fallen behind her male peers. Yet nothing about Soo-in is portrayed all that romantically. Soo-in is first and foremost a sullen teenage girl who's used to feeling beaten down and not getting much support.

This even extends to her coach Jin-tae (played by Lee Joon-hyuk), who spends a surprisingly long time trying to crush Soo-in's spirits. And there's surprising nuance to Lee Joon-hyuk's performance as well. It's not just sexism, it's not just that he feels like pushing Soo-in to recruiters is a waste of time, and it's not just that Jin-tae's own life experiences both in baseball and elsewhere have edged him toward cynicism. All of these factors work in conjunction with one another, and Jin-tae is less won over by Soo-in's grit as he is resigned by her sheer stubbornness.

It is through that stubbornness that "Baseball Girl" paints a remarkable potrait of a young woman who isn't willing to give up the only life she's ever known. Soo-in isn't just stubborn when it comes to baseball either. We see her same surly visage at play with her mother Hae-sook (played by Yeom Hye-ran) and father Gwi-nam (played by Song Young-kyu), themselves often fighting with each other over real-life adult matters. Soo-in herself is also nearing adulthood, making the sharp, obvious impossibility of her dream that much more obvious.

But then, isn't it unrealistic for any teenager to try to become a professional ballplayer..? That's the main tonal point "Baseball Girl" is going for rather than trying to be gender-related commentary, and it works greatly to the movie's favor. I liked how the big problem for Soo-in is less her gender directly and more her small size. While short, low-weight pitchers aren't an impossibility in the game of baseball, merely conceptualizing how such a player fits in the game requires a lot of work.

Fortunately writer/director Choi Yun-tae is well-up to the task, demonstrating a keen understanding of the sport of baseball as Jin-tae begrudgingly analyzes Soo-in's relatively slow throwing speed in terms of rhythm, and her ability to strike players out. "Baseball Girl" is a surprisingly potent reminder about how metrics in baseball can be overrated. Young players of any gender have to be developed, leading to the surprisingly dark ending.

As it turns out, Soo-in's goal wasn't really to play baseball. It was to be taken seriously, for people to understand that baseball isn't a childish indulgence for her. Soo-in genuinely believes, from the very first scene, that she has what it takes to play with the best and the willpower to make that happen. Soo-in wants to be treated like an adult and sees herself as superior to her peers due to her own purely focused resolve. Whether that's really enough is deliberately left ambiguous. But then, so is any truly adult undertaking.