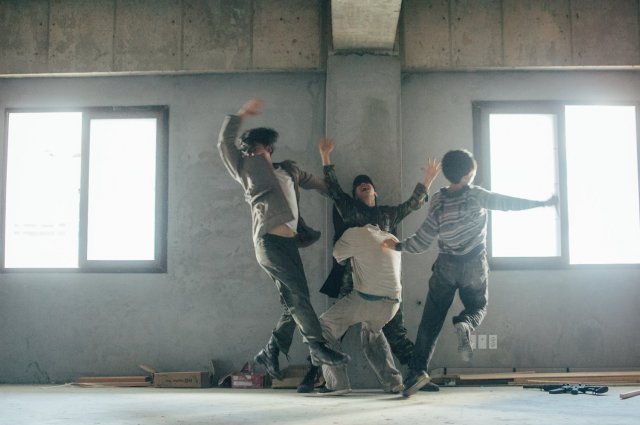 Some particularly nerdy and socially awkward college students will look at superhero flicks and think that such movies represent the full range of cinematic expression. "Behind the Dark Night" is a mockumentary that takes a look at some such students and their quest that goes on for years to bring their epic vision to life. This, even as some members of the project realize that their derivative fan film is a stupid idea and just leave.

Some parts of "Behind the Dark Night", most particularly the opening ones where the principal characters are literally just playing with toys, show a distinct appreciation of the movie's idiotic premise. The audition scene is another highlight. In it we watch a long line of people simply repeat their favorite movie lines that they've rewatched dozens of times over. There's no sense of acting talent. It's just sad mimickry that could only possibly appeal to other die-hard fans. And even the die-hard fans conducting the audition have their limits.

But throughout "Behind the Dark Night" I had a sneaking suspicion that was confirmed by the credits scenes. As close as the production team is to realizing how terrible their ideas are, in the end they still love superhero movies. Their fan film is an ironic appreciation of those movies. On one level they obviously realize that their movie project just consists of mindless mashed together pop culture references, and to get around the utter shame such sincerity inspires, they pretend like it's all just a big joke.

On one end such sincerity is admirable. Don't we all wish that we could be super passionate about something, anything in our lives? On the other end fetishizing superhero movies is still really stupid. And even just on an aesthetic level "Behind the Dark Night" has a lot of pacing issues. There are a fairly large amount of distinctive scenes- and then there are huge stretches where absolutely nothing interesting happens. At one hundred ten minutes the concept is stretched way too thin and the movie really needed better editing.

It's a shame because the actual good parts really do stick out. Over the course of disjointed timeskips one character becomes one of those weird ascetic Christians who lives in an undecorated room and prays a lot while talking up how great meditation is. Such young people do exist in South Korea today, difficult though it may be to believe. "Behind the Dark Night" is at its best when it's a darkly humorous story of the alienation faced by such young people that they embrace, of all things, the god of American superhero movies.

Jokes based around that theme, like the supremely awkward love confession scene that is immediately and somehow convincingly backpedaled, are oddly relatable. Jokes that simply linger around the dumb superhero idea, and act as if fandom is a loving tribute to the inherent brilliance of superhero movies...I mean they're good for a minute or two. But sooner or later they just get overwrought and boring, the same joke repeated without variation.

"[HanCinema's Film Review] "Behind the Dark Night""
by HanCinema is licensed under a Creative Commons Attribution-Share Alike 3.0 Unported License.