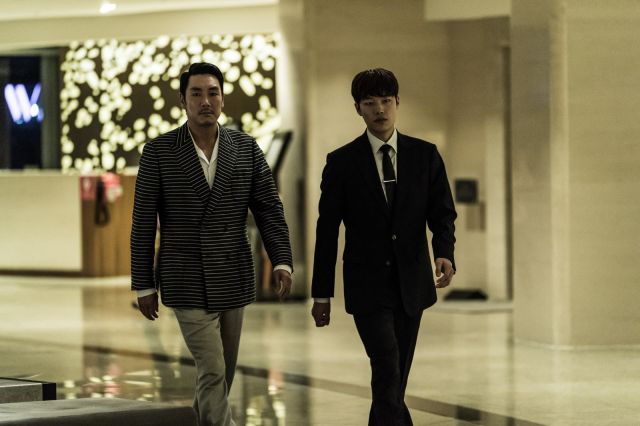 Won-ho (played by Cho Jin-woong) is a prosecutor who works in narcotics. We're first introduced to him via his bratty niece Soo-jeong (played by Keum Sae-rok). Then out of nowhere "Believer" jumps into drugs and death. Yeon-ok (played by Kim Sung-ryung) decides to cooperate with police after a business meeting fails to go as planned, and it isn't long before Won-ho is running a sting on international crime lords Ha-rim (played by Kim Joo-hyuk) and Bo-ryeong (played by Jin Seo-yeon), who are also loony drug addicts.

The scenes featuring Kim Joo-hyuk and Jin Seo-yeon are the big highlights of "Believer" as these are pitch-perfect performances. Ha-rim and Bo-ryeong are middle-aged, with emaciated diseased bodies, weird taste in wardrobe, and an unfortunate tendency to go into loopy violent spasms. Ha-rim and Bo-ryeong are psychotic and unpredictable, yet still claim to be serious businesspeople. They are credible villains who do not in any way glamorize the drug trade, because who in the world would want to be like them?

Unfortunately Ha-rim and Bo-ryeong are such appealing characters nearly everyone else is a bit of a let-down by comparison. Cho Jin-woong's best scene is the sequence where he must pretend to be Ha-rim, which climaxes in a brutal yet believably bad acid trip in cold water. Sadly, Kang Seung-hyun, whose character has to pretend to be Bo-ryeong, doesn't get to do anything interesting during this scene. She does get a one-on-one fight in the climax though.

You may have noticed that this movie has a lot of characters. I haven't even gotten into Rock (played by Ryu Jun-yeol), mainly because even though Ryu Jun-yeol has second-billing and prominence in the marketing material...his character doesn't really do anything. His characterization is set early on as being sad because something bad happened to his dog. Other than that, like Yeon-ok, he just helps out with Won-ho's investigation.

Rock is actually most interesting by proxy because of his relationship with the deaf meth siblings Dong-yeong (played by Kim Dong-young) and Joo-yeong (played by Lee Ju-young). Because really, that whole character concept is so cool, how do you not like it? I loved their furious gesticulating with Rock. I'd never really thought that much about how sign language can take a specific tone beyond the literal meaning, but Dong-yeong and Joo-yeong really sell themselves as deaf people who work in a tough field and make up for their handicap with a personalized blend of casual aggression.

"Believer" is in the awkward position of having its supporting moments be so good that they just call attention to how mediocre the main plot is. I mean, granted, the explosions and the fight scenes are pretty good, but they're nothing we haven't seen before. I just keep thinking about how much of a let down it is when the villain finally goes down because...uh...who was that guy again? It was very considerate of the script to explain this, but even so the ending, and especially that last ambiguous gunshot, were fairly underwhelming.