[HanCinema's Film Review] "Beyond That Mountain" 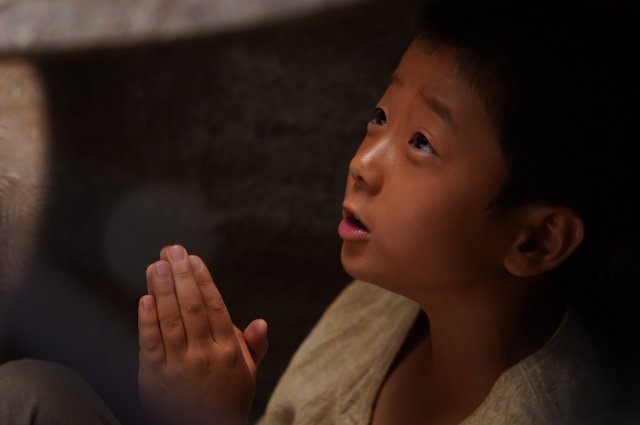 Cardinal Stephen Kim Sou-hwan (played here as a child by Lee Kyung-hoon-I) was a high-ranking member of the Catholic clergy. He is widely known and highly regarded in South Korea for the support he offered to the country's democratization movement. But once upon a time, Sou-hwan was just a normal child like any other. "Beyond That Mountain" tells the story of how Sou-hwan came to understand the world and his place in it, ultimately leading him to take a vocation.

Despite having fairly explicit Catholic subject matter, "Beyond That Mountain" is noteworthy for not actually being all that Catholic in practice. Indeed, some distinctive shots show the young Sou-hwan observing and demonstrating reverence for the occasional Buddhist icon he runs into in his life of being a normal child growing up in the 1930's in Japanese occupied Korea. Sou-hwan frequently sits in silent contemplation of the vast Korean countryside, relying only on intermittent guidance from Father Yoon (played by Kang Shin-il) as to what this all could mean.

Director Choi Jong-tae brilliantly captures the world Sou-hwan lives in from the eyes of a child. A story told by Father Yoon of nineteenth century missionaries is perceived with the utmost innocence as a tragic tale of fate and faith meant largely to beg the question of why humanity exists. Sou-hwan is reflective of suffering, even as he partakes in it and watches his mother, played by Lee Hang-na, struggle with no obvious goal in mind save to provide him with a better life.

In limited perspective her gentle perseverance is sad. But through force of will, Sou-hwan chooses to see his mother's actions in the greater scheme of the universe. Sou-hwan accepts his humble beginnings. Though "Beyond That Mountain" depicts much hardship, even an uplifting scene where Sou-hwan is confronted by Japanese speaking bullies has a sort of fatalism. Sou-hwan sees that any one struggle or battle is meaningless as he comes to understand that hope, much like suffering, is collective.

By not having a clearly defined plot, and deliberately relying on the assumption that the audience knows who Cardinal Stephen Kim Sou-hwan is, "Beyond That Mountain" manages the impressive feat of acheiving a near documentarian picture of what life was like in Korea in the thirties. We see the rough undeveloped towns and markets. We see the beauty of the countryside. And just as Sou-hwan ponders the world as he knows it compared to the world of the nineteenth century missionaries, so too do we as viewers compare our own world to Sou-hwan's.

The overall experience is beautifully bittersweet. From as alien a world as 1930's Korea, director Choi Jong-tae is able to draw upon the universality of human experience to emphasize the inevitability of change. As "Beyond That Mountain" comes to a close, there is no hint in the guileless mind of Sou-hwan that he will be witness to a series of incredible transformations in Korean society. Nevertheless, he has accepted that something will happen. And whatever that something may be, Sou-hwan is prepared to fulfill his own designated role in God's plan.

"[HanCinema's Film Review] "Beyond That Mountain""
by HanCinema is licensed under a Creative Commons Attribution-Share Alike 3.0 Unported License.