[HanCinema's Film Review] "Beyond You"

Four year after the quite successful "ALONE", Park Hong-min returns to Busan with a feature that moves in gender-bender, experimental paths.

The story begins in a park, where director Han Kyeong-ho is "ambushed" by a girl named Ji-yeon. The meeting goes smoothly, until the girl lets him know that she is the daughter of an old girlfriend, In-soon, who is currently suffering from dementia. Not only that, but there is also a high possibility that she is his daughter. Kyeong-ho dismisses the theory and becomes enraged, but soon begins to think that his may be a good idea for a film, and after meeting with In-soon, who seems to remember only things about their life together clearly, he begins to write a script based on what is going on. At the same time, however, both his colleague and his producer, turn down his script harshly, while he finds himself chasing Ji-yeon in the narrow streets of the area, meeting her in a house that seems haunted in some way, before the two of them jump inside In-soon's demented mind, where another labyrinth awaits them. 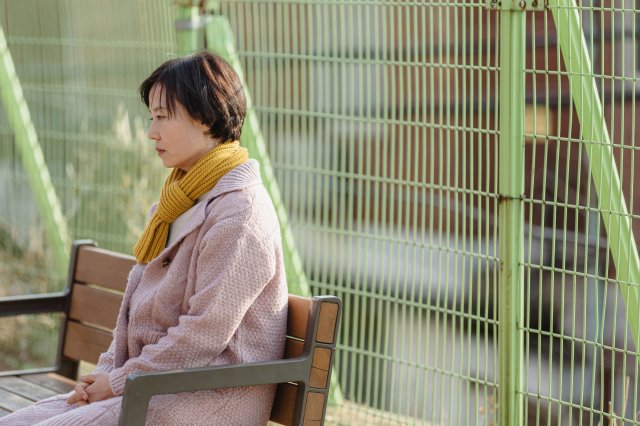 The labyrinths mentioned are also a big part of Park Hong-min's narrative, as, apart from the actual setting of the narrow streets, it moves into paths that lead to melodrama, thriller, and family drama. At the same time, the past meddles with the present, and reality with fantasy, resulting in a film that starts complicated, and becomes more confusing and surrealistic as time passes.

Somewhere inside all this chaos however, Park seems to make a comment about how films are made, from the conception of an idea by a filmmaker, to the hard path to pre-production, which passes through the impossible stage of monetizing the project. Through this comment and the way the narrative unfolds, it seems as if the protagonists, and in essence, the viewer are moving in two labyrinths, one mirroring the way movies are made and one the mind of the director (both the actual one and the one in the film).

The overall approach is intriguing and quite ambitious, but after a point, it becomes somewhat tiresome and looking more as an exercise on cinematic techniques rather than an actual movie. That "Beyond You" stretches for almost two hours intensifies this aspect, essentially making the movie difficult to watch, particularly after a point.

The acting aspect, on the other hand, is quite good, since the cast manages to resonate harmonically with the extreme narrative. The chemistry between Kim Kwon-hoo as Kyeong-ho and Yoon Hye-ri-I as Ji-yeon is one of the best traits here, particularly due to the way they portray their antithesis, him as constantly confused and her as perpetually calm and resolved. Oh Mine is also excellent as the demented mother, portraying her role with a sense of measure that benefits the whole chaotic narrative.

Kim Byeong-jung's cinematography follows documentary-like paths, with the camera tracking the protagonists from behind as they move, for the most part, although the approach during the thriller part is genre-oriented. The same applies to the main intense close-ups to ants and the way they move on the ground, a part that also has contenxtual meaning after a fashion. Park Hong-min's editing implements the sense of disorientation fittingly, although the movie would definitely benefit from some more trimming.

"Beyond You" is an ambitious and intriguing movie, but in the end, Park seems to have confused himself as much as his viewers.