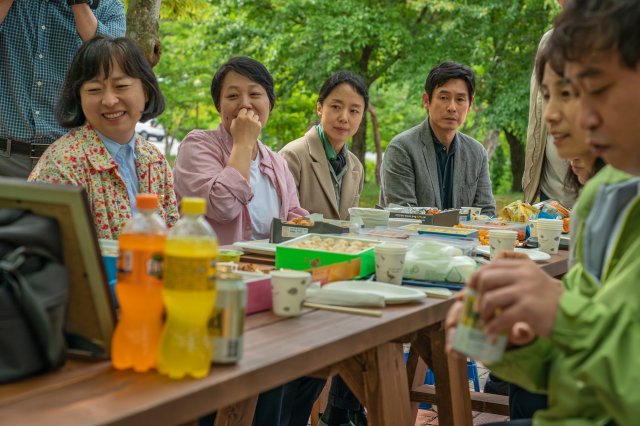 As "Birthday" opens up, we see the middle-aged Jeong-il (played by Sol Kyung-gu) on an airplane, looking pensive as he comes back to South Korea. This sense of nervousness is soon justified by a strange setpiece wherein Jeong-il he tries to go home, but his wife Soon-nam (played by Jeon Do-yeon) simply stands silently behind the door. Jeong-il doesn't know for sure whether Soon-nam's rejecting him, or if she can even hear him. Yet somehow the tone of the scene indicates that the possibility of the former is oddly logical for him.

The title of "Birthday" refers to the birthday of Jeong-il and Soon-nam's teenage son Soo-ho (played by Yoon Chan-young). A grief counselor has been trying to get Soon-nam to come to Soo-ho's birthday party. Soo-ho being dead would seem to render such a party pointless, but the counselor insists that it will help in the healing process. Soon-nam is skeptical, but then her generally bitter and loud coping mechanisms aren't exactly anything to write home about either.

The situation with Jeong-il is even more awkward- he's been working overseas for the two years since Soo-ho died as part of a five year contract. Later exposition demonstrates that there was a good reason why Jeong-il behaved in such an apparently cowardly way when his family needed him, not that the explanation proves very helpful. This is an important recurring theme- in trying to deal with their grief logically, Jeong-il and Soon-nam usually just end up provoking emotional breakdowns.

The only real source of comfort for either one of them is to focus on other things. This is strongly typified via their daughter Ye-sol (played by Kim Bo-min-I), a shy, happy elementary school student who still misses her brother and has fears relevant to that emotion. Soon-nam is evasive when it comes to other adults, especially ones with valid reasons to share in her grief. And Jeong-il, of course, is in the awkward position of having to explain that he is Soo-ho's father, none of the new people he's met ever having seen him before.

I've likely made "Birthday" sounds miserably sad by now, so at this point I should emphasize that the film is quite a bit more cheerful than it sounds. "Birthday" is about coping mechanisms, some destructive, and some pointless, and some counterproductive but others do manage to work. These working moments are minor victories for the characters who achieve them- and even if they can be emotionally jumpy, their agony is understandable. We see Jeong-il and Soon-nam as people trying to avoid living in permanent grief.

But be that as it may, the emotional high point of the movie is when we finally get to the birthday party and every character, however minor, gets a chance to partake in why Soo-ho and specifically Soo-ho was special. We can see the therapeutic effect play out in real time. It's beautiful and sad. Even in death, we can see how Soo-ho made a difference, and how his lingering spirit need not be a malevolent one in the lives of his loved ones.