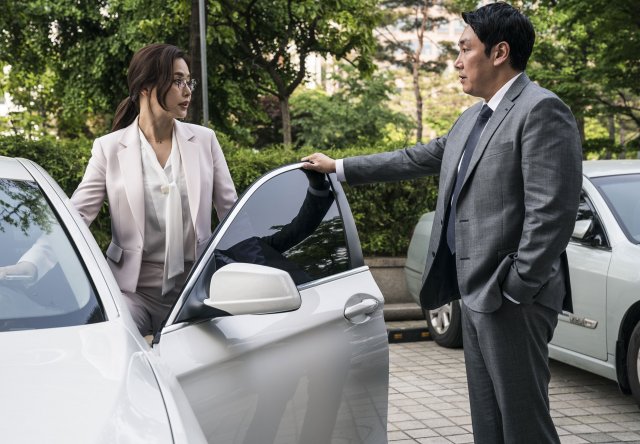 As "Black Money" starts out an ominous looking subtitle at the bottom of the screen lists a countdown to the date of sale of a South Korean bank to a foreign firm. The specificness of the days, the generally unremarkable setting year of 2011, as well as the technical, legal, and business jargon that predominates "Black Money" led me to believe that this movie was based on a real-life event. And it is, sort of, except all the names are changed and the characters are completely made up.

"Black Money" is based on the sale of the Korean Exchange Bank to the American equity firm Lone Star Funds. I'm still a little hazy on how or why the sale took place but in broad strokes wealthy Koreans related to the bank seem to have used the deal to enrich themselves at the expense of the working class people whose businesses depended on the bank's capital. The deal appears to have been illegal, although probably corrupt prosecutors at the time did not seem very interested in the topic.

Somewhat counterintuitively the lead character then ends up being a prosecutor. Specifically, Min-hyeok (played by Cho Jin-woong), a boorish man from a humble background who investigates the case for self-preservation reasons. Then our second lead character turns out to be Na-ri (played by Lee Hanee), an educated woman from a cultured family who's doing public relation work for the suspicious deal.

Neither of these characters are especially likable at first. And yet Cho Jin-woong and Lee Hanee both manage to put in surprisingly convincing performances as they slowly come to realize there are much bigger ethical issues at play than the ones that caused them to get involved in the case. I enjoyed both of their character journeys because they were subtle and understated, with the two eventually diverging largely thanks to their having come to focus on different priorities.

Unfortunately the actual plot is more muddled than that. Because "Black Money" is set up as a mystery information is frequently withheld, and it's difficult to guess which of the movie's many esoteric details are important or why when they're brought up again. The movie opens up with a scene of vehicular homicide and frequent reference is made to apparent suicides that may or may not have actually been suicides but Min-hyeok doesn't actually investigate any of this stuff, just the financial crimes that are implied to be related to it.

I can appreciate the pedagogical aims of director Chung Ji-young trying to go over a real-life financial crime case within the trappings of a more typical crime thriller. But these elements are often distracting and detract from each other's point. The formulaic construction of the script becomes especially grating near the end, where epic musical cues punctuate a theatrical setpiece wherein incriminating documents are disseminated to an angry mob. If a movie is based on a case of financial corruption where no one was punished I don't think an upbeat ending is allowed.