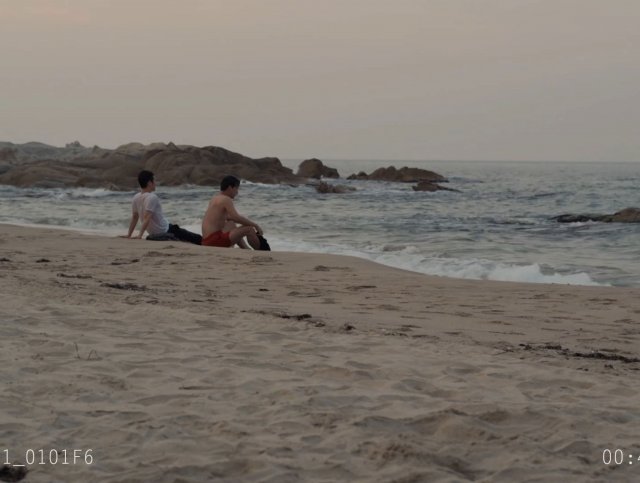 Ji-hyeon (played by Woo Ji-hyun) works at the film department of an unnamed university. It's mostly technical stuff, but he has creative aspirations. So it is that he meets Geon-woo (played by Lee Gun-woo-I), an actor with whom Ji-hyeon has many things in common. They're both adrift in life. They both have estranged relationships with their families. They like social drinking, but are quickly bored by conversational drinking. They're not particularly physically affectionate with their girlfriends. They're also mentally and sexually attracted to each other.

Technically speaking that last bit is a spoiler, as writer/director Lee Won-young takes his sweet time getting to that point. But there's a good reason for that. Neither Ji-hyeon nor Geon-woo are gay, which is to say, they are not related to or interested in local gay culture. Both men are extremely introspective and generally quiet. They're not the kind of people who feel like running around talking about their sexuality, and this would be true even if they were heterosexuals.

This gives their love story a substantially different tone than is currently considered fashionable in countries that have made more strident progress toward gay rights. There's no element of pride. Ji-hyeon and Geon-woo primarily identify themselves in terms of their generally unimpressive career trajectories. They know they don't have much to offer society at large. This is why their finding and falling in love with each other is so poignant.

That tonal choice also forces the "Black Summer" to move along at a fairly glacial pace. Because that's just how it is with two painfully shy guys who are equally terrified to make the first move. Their most intimate moments are dreamlike, or even literally dreams, as we watch them prod each other about the unknown, chronically unsure how the other will react. This sense of soft romance is so overwhelming that when other people finally discover the relationship, the insult takes on bizarre dimensions. Ji-hyeon is angry less because of the homophobia and more because their innately private intimacy has been violated.

"Black Summer" is principally a story about how Ji-hyeon and Geon-woo have come to trust each other, and why. As for the actual plot, well, there's really not much of that to speak of. I'm still not totally sure what to make of the first several opening scenes. They're structured like a framing device, but there's so little concrete information these events could have taken place before or after the main part of the story. This is what happens with scripts that rely too heavily on vague pronouns, especially in the context of funeral scenes.

In general "Black Summer" needed much better editing. I mean sure, some extended long shots are necessary to emphasize the self-imposed monotony of Ji-hyeon's life. But these scenes of quiet contemplation get to be overbearing, especially when the few moments of genuine extrapersonal drama are so short by comparison. We're often deprived of even the simple pleasure of actually seeing a woman slap a man really hard.