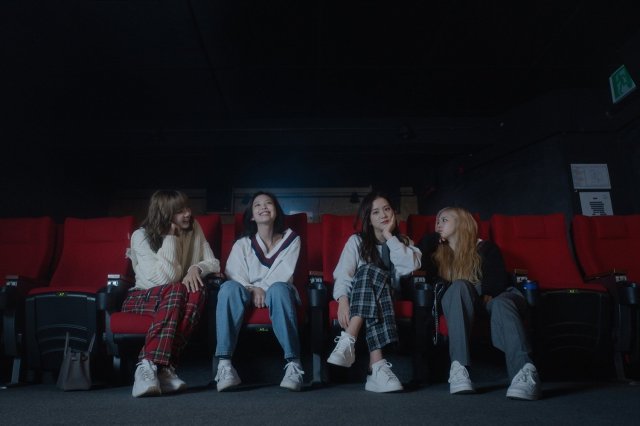 An early conversation with the producer and songwriter of BLACKPINK, Teddy Park on a low profile, closes out with him being dismissive of the idea that K-pop actually exists. He's just like, music is music, and we're playing to an international audience. How is that any different from any other kind of popular music? This thesis resounds throughout "BLACKPINK: Light Up the Sky", which goes out of its way to emphasize the international nature of its group.

Before the background of the various members of BLACKPINK is clearly explained, director Caroline Suh makes a point of giving us a lot of private conversations between the young women of the group, most notably while they're riding together in a car ride. What really sticks out about these conversations is the constant code switching. They change languages from English to Korean to Thai seemingly at random. But as I saw more of these discussions, I could detect a more consistent rhythm in the way they discourse, synchronizing their thoughts to one another.

It's a highly appropriate metaphor for their musical talent. Well, presumably. "BLACKPINK: Light Up the Sky" doesn't really do very much when it comes to showcasing what BLACKPINK are like as performers. Given that the documentary is only eighty minutes long, once again it's pretty clear that director Caroline Suh is being vague about this point on purpose. We see some cheesy audition videos after all, when these young women were still just kids, and their musical styles and influences were quite diverse.

This is the whole point. Only one of the women, Jisoo, was born and bred in South Korea. Jennie grew up in New Zealand, and Rose in Australia. Lisa is actually a Thai woman. The point is, whatever their ethnic backgrounds, these four girls were from radically different places in the world, with radically different life experiences. From this discordance, YG Entertainment slowly turned them into a distinct group, with a distinct voice.

BLACKPINK has an international following because they're an internationally minded group. It's highly appropriate how much of "BLACKPINK: Light Up the Sky" is leading up to the group's performance at Coachella. Once Coachella finally happens, they seem a bit bewildered, having expected to play to a relative boutique audience. But as it turns out, they have lots and lots of fans. And when they give each other a big hug at the end of their set, we can plainly see that BLACKPINK talked to each other on that stage the same way they've talked to each other throughout the documentary.

And how do they talk to each other..? Well, let's call it nutric girliness. Despite discussion about maybe wanting to do something more girly, I was impressed how BLACKPINK could even make something like crying sound cool. Happy tears, happy tears. The training system to become a K-pop style is portrayed as grueling, yet the members of BLACKPINK show stubborn resilience in trying to make their dreams come true. Suffice to say, I can see why they have such a strong fan following.