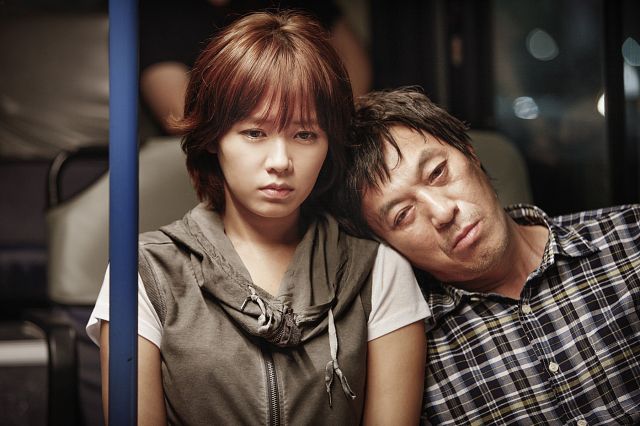 Da-Eun (played by Son Ye-jin) is a normal happy woman who spends lots of time hanging out with her friends. Like many young people her life is generally adrift, but that's fine because she always has a home to come back to. Her father Soon-Man (played by Kim Kap-soo) is a kind demure man who's always there for Da-Eun whenever she needs it, and who in every conceivable way is the perfect dad. But then Da-Eun incidentally comes upon a troubling bit of information that threatens to send the relationship into a tailspin.

And that's pretty much about it. "Blood and Ties" does have one interesting plot twist, where the literal Korean title (accomplice) is explained. It's about the only part of this movie that tries to do anything particularly intelligent or inventive- what if Soon-Man is a criminal? What does it say about him, and his relationship with Da-Eun, if this seedier aspect of his personality was always in the back of his mind even as he was raising his daughter?

Well, I have absolutely no idea. Unfortunately the movie never focuses on or explains Soo-Man's motivation in any noteworthy detail. It's only determined for sure whether or not he's the criminal at the very end of the movie. With only a few minutes left to go, there simply isn't any time to get into the person Soon-Man is in any satisfying detail, and the film as a whole suffers for this.

We do get to see a lot of Da-Eun, and her agony over wondering about all this stuff, but as protagonists go she's not a terribly active one. Aside from the one aforementioned plot twist, Da-Eun mostly just passively mopes around wondering whether or not her dad is a criminal. This on its own might make for an interesting film, if there were some better indication of why Da-Eun feels so indecisive. Most genuinely happy daughters don't jump to the conclusion that their loving father is a secret criminal mastermind based on evidence obtained in a movie theater. And yet so far as I can tell that's exactly what happens here.

In technical terms "Blood and Ties" is a passable movie. The set design, cinematography and camerawork are all adequate, and indicate a reasonably competent crew. The narrative makes logical sense. It's pretty easy to follow from beginning to end all the major developments in the plot and changes in the sentiments of the characters. Character motivations aren't terribly well-explained, but they're passable.

The trouble is that none of these are particularly compelling reasons for anyone to actually want to watch this movie. It's completely lacking in any genuine heart or sentiment. The emotional turbulence of the heroine follows a wholly predictable trajectory in the same perfunctory sense that "Blood and Ties" runs off its rather uninspired plotline. This is a film that really needed to take a risk somewhere, just to try something, anything interesting. Regrettably, the final product instead ends up a rather mundane one, not worth seeking out even for novelty value.

"Blood and Ties" is directed by Gook Dong-seok and features Son Ye-jin and Kim Kap-soo.