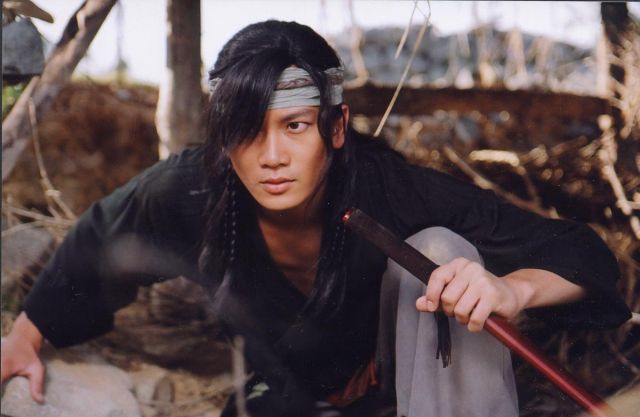 There's a fair degree of medieval brutality in "Blood Rain". This is a movie in which we watch multiple people viciously murdered in about the most uncomfortable way possible. What really enhances the misery of these scenes is that they're just long enough that some slight thread of hope comes up that maybe, just maybe, this won't end as horribly as it looks. Of course, that's not how grisly death by torture works. Anyone who puts that much effort into a death trap is smart enough to build one that won't screw up.

What really enhances the discomfort in these scenes is that all the characters, whether they be the investigators, the criminals, or just the random townspeople, show themselves to be fully capable of this brutality without so much as flinching about the aftermath. They all just stand around as disaffected observers, with no real identifiable response beyond "sure am glad this isn't happening to me!"

Ah, right, the plot. Accidents and murders are piling up on Donghwa Island, circa the early nineteenth century in Joseon-era Korea. Royal authorities get involved when one such incident destroys a valuable shipment of paper destined for official functions. So on the fundamental level, "Blood Rain" is a murder mystery. The usual tropes of law and justice abound, as does the conflict of science and superstition.

Unfortunately none of these particular elements are especially outstanding. They're passable well enough to keep the mystery fan engaged. However, the deliberately confused story elements, the lack of particularly engaging characterization, and the disorienting cinematography are such to keep this from being a genuinely great detective story. That makes the film difficult to recommend on general merits.

The torturous death scenes and traps, though, are another matter altogether. I can't really empathize with the characters on-screen- they're being Koreans from two hundred years ago just makes the gap too wide here. But watching this film as a present-day observer brings up some uncomfortable truths. Supernatural or not, the killings are undeniably heavily influenced by the march to modernization. Medieval though these death contraptions may be, the motivation behind them is a special kind of hatred that can only be created through the indifference of ideology. The investigators, far from bringing a forward-looking society, appear to be helping to provoke more of the same.

In this sense the superstition that makes up so much of "Blood Rain", and figures immensely in the film's climax, takes on much broader, much more worrisome dimensions. Vengeful ghosts may or may not be real, but the very fact that a situation can so ambiguously be either the result of men or spirits is in itself a pretty harsh condemnation of the idea that society is always moving forward to a necessarily better place, rather than one that just does a better job with its elaborate justifications and moments of intense, unnecessarily cruel pain. "Blood Rain" may not be terribly convincing as a standard mystery, but it's allegorical overtones are excellent. While not all the movie's weaknesses are overcome by them, enough is done well here to warrant a recommendation.