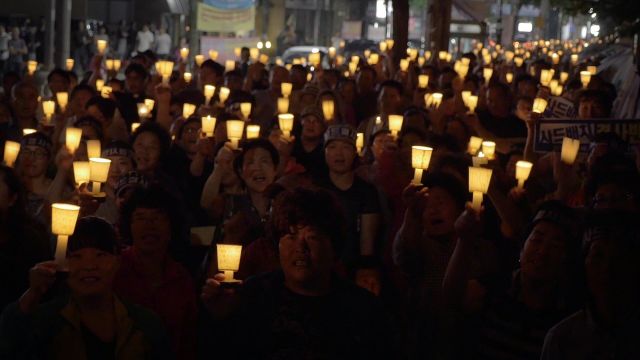 The THAAD (Terminal High Altitude Area Defense) missile system is, we are assured, necessary to defend against the North Koreans. There's just one problem- THAAD has to be physically placed somewhere in South Korea. And former President Park Geun-hye's administration chose poorly when they decided to place THAAD near Seongju, a location with enough of a local population to push back against the prospect of an advanced electromagnetic weapons system being deployed near their children.

"Blue Butterfly Effect" is immediately focused on the local anti-THAAD movement in Seongju, which increased their awareness through blue butterfly ribbons which dispersed among activist communities in southeastern Korea and beyond. But the documentary is also valuable as a sort of window into what exactly the South Korean left has been doing under the last couple of conservative administrations. Which is, mostly, get mad at the government for making big decisions arbitrarily without consulting or even thinking they need to consult the people in the communities most immediately affected.

We see this time and again with the people director Emmanuel Moonchil Park interviews. Yeah, I used to vote for the Saenuri party. Yeah, I voted for Park Geun-hye. That sure was a dumb idea. This is what real activism looks like. The citizens of Seongju felt like they were getting pushed around, so they fought back by being louder and angrier. The more dirty tricks government officials used to try and silence dissent, the louder and angrier the protest got.

But where "Blue Butterfly Effect" really gets into ambiguous territory is when the government decides to compromise and move THAAD to a less populated area. Had they done this at the start, THAAD protests likely would not have been that big an issue. Yet these same former Saenuri Party supporters, having become interested enough in THAAD to read up on the topic, suddenly find that the whole national security excuse for THAAD is on shaky grounds to begin with, and start questioning everything the government has ever told them.

I've always liked the idea that free speech is about listening, not talking. And that's what we see happen in "Blue Butterfly Effect" is just this constant conversation. The 1318 group which started disseminating information got its name because apparently, that's the maximum number of people who can log in to that particular chat client at a time. In one of the documentary's darker moments of humor, one person mentions how initially, they thought the government was preventing people from connecting in.

That's never a happy moment, realizing that weapons the government claims to only use against enemies of the state can easily be turned against its own citizens, if that's what it wants. The story of THAAD in Seongju is just one of many that explains the current political situation in South Korea- but where it's most useful is in showing us the concerns of common citizens, and noting shared solidarity. Any one of us anywhere could suddenly become the victim of the whims of the government. It's a story well deserving of the Jeonju International Film Festival's Documentary Award.