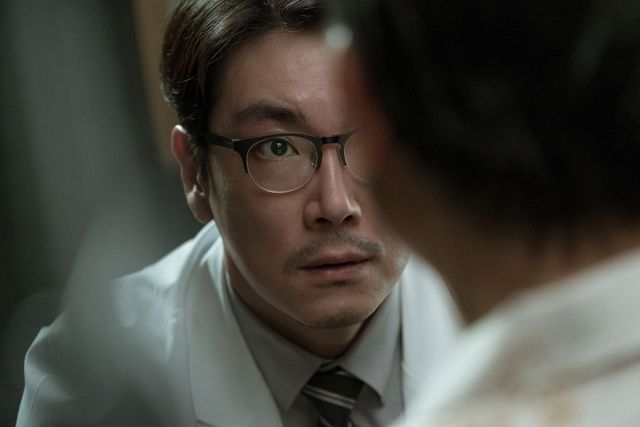 Seung-hoon (played by Cho Jin-woong) is a gastroenterologist of limited social skills. Hence why he's split up from his obviously gorgeous wife Soo-jeong (played by Yoon Se-ah) and completely oblivious to the attentions of attending nurse Mi-yeon (played by Lee Chung-ah). What does interest Seung-hoon is the obsessive world of detective mysteries where every minor detail is an important clue to unraveling the identity of the true criminal. Finding such a clue to a real life crime during an apparently routine colonoscopy, well, that's where Seung-hoon's troubles begin.

The central defining mystery of "Bluebeard" isn't so much the identity of the serial killer (we know for a fact there's one running around somewhere) as it is the true state of Seung-hoon's mind. Is he actually on to something, is he just an obsessive nerd, or is Seung-hoon legitimately a full-on crazy person? Obviously I can't just tell you the answer to that question, since it would ruin the movie.

What I can tell you is that the production values are top-notch. While almost completely lacking in legitimately scary moments writer/director Lee Soo-yeon constantly plays up every minor encounter Seung-hoon has with terrifying music and spookily large dark corridors. It's a great way to metaphorically depict Seung-hoon's own psychic imbalance, because he, too, can see that to some extent his imagination is playing up mundane encounters beyond all known reality. Yet for all that Seung-hoon is not quite the unreliable narrator he seems to be.

Consider how the big important moments during the final summation are from literal plot holes. I am referring to scenes which writer/director Lee Soo-yeon skipped for reasons which were not obvious at the time, or strangely concilatory behavior on Seung-hoon's part with no obvious motive. In the end everything is clearly explained, even if such and such character makes the unfortunate decision of concluding that explaining most of the mystery is an acceptable alternative to explaining all of it.

That designation most obviously applies to Seung-hoon himself, who for all his deductive tendencies shows surprisingly little interest in anything aside from the ominously shaped black bag. Seung-hoon ignores Soo-jeong and Mi-yeon at his own peril- there is, after all, a very human element underlying any human mystery. Really, Seung-hoon's biggest mistake is looking at Soo-jeong and Mi-yeon as being inherently irrational female victims rather than serious players in a grand conspiracy who know more than he gives them credit for.

But again, I can only go so far without descending into direct spoilers. "Bluebeard" is the kind of excessively complicated plot that leaves a person gasping for quite awhile afterwards, trying to fit all the apparent contradictions into a single coherent narrative. I was very impressed that, aside from perfectly catching the look and feel of a psychological thriller, writer/director Lee Soo-yeon also manages to pull off an almost flawless mystery. I mean that literally, as in, referring to logical errors. Aesthetically "Bluebeard" is a tad intense and I can see how some people would be overwhelmed- but I really liked it a lot.