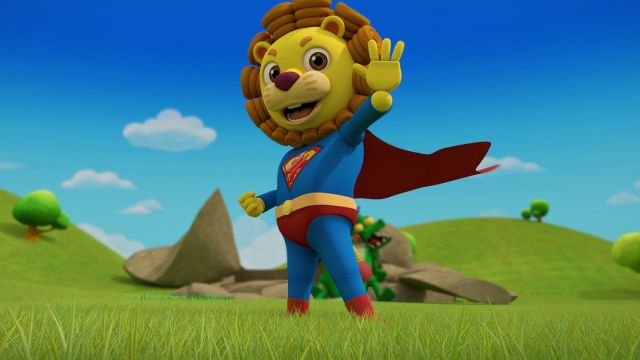 So apparently way back in 2013 a new children's cartoon appeared on South Korean television called Boing The Play Ranger. The setting is Playville, where all the residents are based off of playground toys. The titular Boing (voiced by Jeon Tae-yeol) is a spring-based riding lion. And apparently some five years after Boing The Play Ranger first premiered the cartoon is only just now getting an origin story depicting how Boing became a play ranger in the first place.

The process isn't as elaborate as it sounds. In the end, Boing only has to believe in himself and everything else will follow naturally. This is somewhat counter-intuitive, because Boing is filled with self-esteem from the very beginning, and unfortunate slapstick consequences result. This low-brow and often literally poopy humor is the main substance "Boing The Play Ranger: Super Secret Transformation" has to offer until the true villain makes an appearance.

I found myself wondering how exactly the park ranger accreditation process works. The surprised adoring response Boing gives upon meeting elephant ranger captain Elloo (voiced by Kim Eun-ah-I) at school would appear to imply that this is Boing's first day. Of course if I really want to nitpick, the real question is what Dr. Hyena (voiced by Um Sang-hyun) was supposed to teach everyone in class. The guy stumbles around buffoonishly for a minute and delivers exposition before just leaving in a huff.

"Boing The Play Ranger: Super Secret Transformation" is not especially remarkably bad. At least, the movie is aimed so squarely at a younger audience I can't find much fault in the plot holes. None of them are particularly noticeable and they mainly serve to make the characters just childlike enough to be relatable to the target demographic while still having the requisite semi-adult competence necessary to go on wacky adventures.

I can give some fairly sincere praise to the character design in that respect. Having a setting based entirely around anthropomorphic playground toys is an unavoidably weird idea but the production team manages to make them look pretty neat. Monkey ranger Mongba (voiced by Hong So-yeong) extends himself into sturdy monkey bars of various shapes. Hippo ranger Bing Bing (voiced by Jeong Yeong-woong) can turn himself into a small carousel. These abilities are extremely bright and visually distinctive- they go along great with the blocky style of the overall animation.

But teamwork, and knowing personal limits, is the main critical moral lesson being bandied about. While Boing is of questionable usefulness when it comes to tasks that require any kind of precision, he's great at making giant movements in a single springy bound. The visual solutions that make up the climax are great- although I must question the logic behind teaching impressionable youngsters that lemons have borderline magical powers.

"Boing The Play Ranger: Super Secret Transformation" is passable as background noise when you want to distract children, not particularly obnoxious. and on occasion even manages to be moderately interesting. Which is decent, as far as this genre of direct to video movie is concerned.