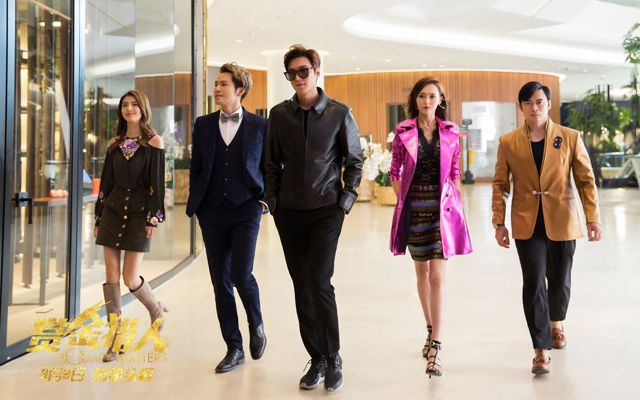 As counter-intuitive as this idea might sound, it really is important for the main characters in big action movies to be kind of dumb, and clearly acknowledged as such by the script. Why? Because then their failures (or even successes) can be attributed to their stupidity, which is funny even if the overall situation has serious dramatic stakes. So it is in "Bounty Hunters", where our first introduction to San (played by Lee Min-ho) features him solving a problem with epic cool fighting moves- but ultimately failing due to his own ignorance of what the problem even was in the first place.

Bear in mind that my use of the term car chases here is largely metaphorical. As in, it's a metaphor for explosions. The real reason any of us watch an action movie. Does the plot make any sense? Uh, no, but why would it? Like, have any of you considered the implications if in the real world civilization ending calamity could only be stopped by a man who loves cake too much to notice that cake apropos of nothing is suspicious?

Most of the jokes in "The Bounty Hunters" are like this. They resonate on the power of the sheer complicated absurdity of the main characters' failures, and how jokes that take several sentences to explain in-depth are almost immediately parsable in context. Consider how leading lady Cat (played by Tiffany Tang) is outrageously wealthy. The technical reason for why a wealthy heiress would become a bounty hunter is predictably silly. But it's immediately obvious why Cat has this character trait because ooo, shiny impractical gadgets with obvious slapstick implications!

I was able to watch "The Bounty Hunters" mostly in an easily pleased state of mind. I figured, hey, if loud stupid stuff is good enough for Lee San to coast through life, why not me? Regrettably the movie gets a lot less fun once it's finally explained who the villain is and what he wants. Because sadly, there is no way to spin a monstrously cartoonishly evil villain monologue into something that ends with a punchline. Either the main characters win or they don't and let's face it. "The Bounty Hunters" is not the kind of movie where they don't.

Still, I liked the stupid jokes. There's just something so visceral in the banana peel style of humor, where comeuppance is instantaneous and you just have to allow yourself to ignore pesky technical questions like how does a single woman manage to move three adult men a long distance by herself? Sometimes you just have to shrug your shoulders and go hey, it's a movie. It doesn't have to make sense.