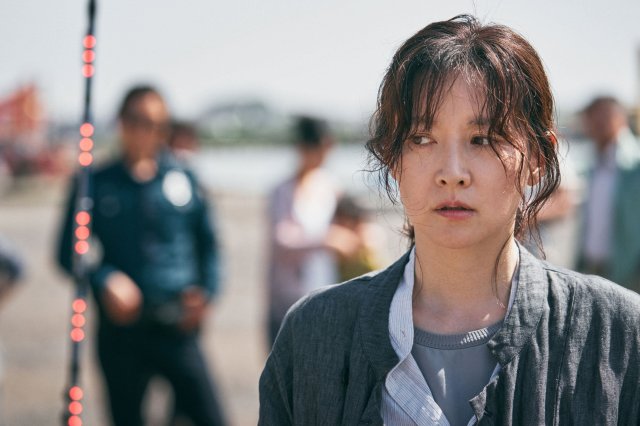 As "Bring Me Home" opens up there's surprisingly little trace of the dramatic thriller that was promised in the film's promotional material. For the first act of "Bring Me Home" we mostly just watch Jeong-yeon (played by Lee Young-ae) and Myeong-gook (played by Park Hae-joon) grieve over the loss of their son, while still encouraging one another to be positive and not give up hope. Their willingness to put on a strong face, after all, is motivation for others to endure and not give up.

There's a stark realism at play in "Bring Me Home" not commonly seen in movies dealing with dark, edgy crimes. Take the various suspicious characters who inhabit the cheap seaside fishing village where most of the action takes place. None of these people are really career criminals. They all just managed to edge their way into crime via rationalization. Corporal Hong (played by Yoo Jae-myung) is one of the creepier corrupt cops in recent memory because he's not really evil so much as aggressively lazy, and used to solving problems by bullying people with his badge.

The crimes depicting in "Bring Me Home" are frightening because they're so frustratingly petty, and in large part propagated by an obviously mentally challenged man with little distinction between right and wrong. All the problems depicted in this movie are so frustratingly, easily solvable. Indeed, the main reason there's any conflict at all is because a pointless middleman interrupts Jeong-yeon's search, forcing her to proceed without the necessary backup.

On one end this works as a condemnation of society, that all too often expects people to rely on one another's good intentions with no real follow-up. But more metaphorically, the physical lonesomeness with which Jeong-yeon approaches the fishing village matches her mental despair. Through subtle pressures and even explicit gaslighting, Jeong-yeon is encouraged to give up. All that she has to force herself through to the end are the strong words of encouragement she received from friends and loved ones in the first act.

Through Lee Young-ae's fantastic performance we can see her clinging to these hopes like a talisman, thankfully without the clumsy use of flashbacks. During the latter part of "Bring Me Home" I often thought back to a scene where Jeong-yeon is counseled by a former missing child on the importance of not giving up. That story, about what happened to a family that decided to forsake hope, proves ominously prophetic as the film moves forward, and Jeong-yeon is left wondering how much she should keep pushing.

The main moments of terror are startlingly mundane. In a screenplay that probably looks predictable out of context writer/director Kim Seung-woo-I manages to wring out some fairly powerful tension. The moments of foreboding death are some of the worst in this regard, as we see victim and perpetrator alike, equally human, grapple with the feeling that hope is a lie. "Bring Me Home" is sympathetic in a way that's genuinely uncomfortable, where empathy simultaneously proves to be both a savior and a destroyer.