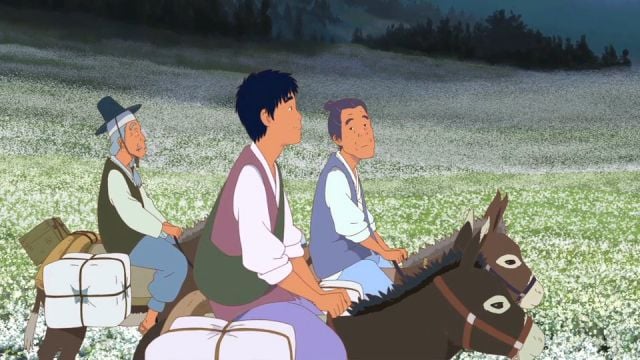 As much as they may try, historical pieces can never really get at true authenticity as to what life really looked like back then. It's a fact that's easier to appreciate if you watch older movies. No modern film can ever look as convincingly like the sixties as a movie that was actually made during the sixties. "The Road Called Life" solves this dilemma in an unusual way- by using animation to recreate the feel of old life. Well, that and period stories.

The mission statement of this omnibus is pretty clear- take Korean short story classics and use modern technology to create the memory of bygone days that wasn't possible at the time. In animation terms, at least, "The Road Called Life" is a marvelous success. For the first two films, we're treated to incredible, beautiful countryside vistas in full bright vivid colors. The sight is an incredible one, and my only complaint is that it wasn't in 3D. That's right- the animation here is so absolutely immersive I was disappointed that I couldn't perceive the depth in the undulating grass of the winds.

The final piece likewise paints a grim picture of Korea in the grasp of modernity, where everything has a somewhat modern feel, yet it's all just a tad untidy. This isn't just a quirk of the animation, but also an indicator of tone. Whereas the first two stories utilize slow pacing and emphasize the idea of time constantly being at a standstill, the final piece is incredibly tense. For the first time we get a sense of genuine stress rather than mere agitation, and it's easy enough to connect that to the change of backdrop.

At first brush it's tempting to write off "The Road Called Life" as being overly romantic as regards rural life. Then it sinks in that, again, the scenario is based on stories that were written at the time, and the fact that the subject matter changes so much is a reflection of how people's priorities themselves changed. Perhaps urbanization was a degrading, dangerous process, perhaps it only seemed as such because the dangers of rural life had been internalized. Either way, things change.

This is, admittedly, not a terribly deep and impressive message. Literary credentials notwithstanding, I only felt particularly emotional at the conclusion of A Lucky Day. Although the general malaise of that story is certainly interesting for the way it repaints the antics of Spring. When Spring wears thin, it doesn't take that long into A Lucky Day for the viewer to wish for the return of such comparatively low stakes antics.

In any event all three stories are self-contained, so you don't have to look for comparative meaning from one decade to another unless you really want to. If you'd rather just sit back and take in the well-crafted portrait of life in Korean from bygone days, that's your prerogative. Like this studio's previous work, "Green Days: Dinosaur and I", "The Road Called Life" is less about forcing artistry and more about being soft and relatable- a capsule of life as was once known with animation being used as the tool to capture the trueness of the moment.