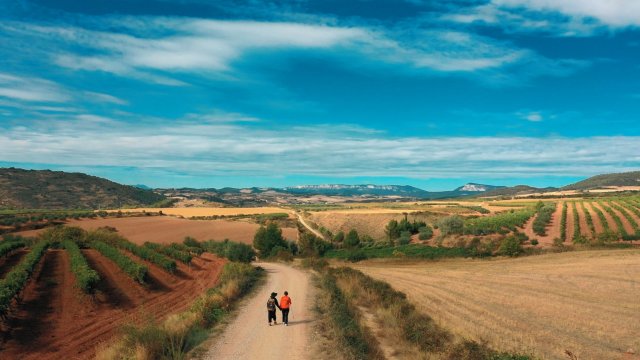 The Way of St. James is a pilgrimage route through the Northern part of Spain. It leads from France to the Cathedral of Santiago de Compostela in Galicia, terminating at the shrine of St. James the Great. It's at best a historical curiousity in most English language culture. I'd never even heard of it before coming to South Korea. Yet it's been featured in travel books, variety shows and now, "Buen Camino", depicting an older legally blind masseuse and her teenage niece on the trail.

The first, most distinctive aspect of "Buen Camino" is how director Lee Jongeun is able to beautifully capture wide extended shots of his two leading ladies on the trail. Even as we can see vehicular roads in the distant background, the sheer scale of the world surrounding the trail is astonishing. The metaphor for how the Way of St. James is also the road of life is a humbling one. The pilgrimage is, by design, is exhausting and intended to show devotion.

The endless walking allows ample time for self-reflection. Though "Buen Camino" eschews dramatics overall, one distinctive scene show our blind masseuse just raging over her misfortunes in life, as the innkeeper we had earlier seen her flamenco dancing with just hangs back awkwardly in the background. The sheer raw emotion of her story can't be replicated, which is why director Lee Jongeun had no choice but to use such an awkward shot.

Much of the documentary flows the same way. For the most part we're seeing the beauty of the countryside but every so often the two subjects interact with each other, or the people on the road. These interruptions take on powerful spiritual significance simply because they symbolize how we have to be dragged back into the real world from quiet appreciation. The Way of St. James is also physically exhausting. It's at the bare edge of the old masseuse's abilities.

So why is she doing it? Sure, people like traveling in general, but that's not really what a pilgrimage is all about. No one is really showing off how cool they are, and for the most part Lee Jongeun's subjects have little to no awareness that a camera is even present at all. I'm not sure they were ever actually expecting any of this footage to get into a theater. They didn't go on the Way of St. James because it was there. They went on the Way of St. James because they were there. They exist. And it is only in the absence of the everyday trappings we all take for granted that they can really understand this.

There's a subtle sense of greater understanding that's difficult to express verbally when it comes to a situation like this. I think that's what the real appeal of the trail is. Beyond reason, beyond faith even, what is our purpose? Why do we exist? Mortality is frightening, yet by coming face-to-face with the Way of St. James, it's possible to look beyond the hopelessness and see the majesty of creation.