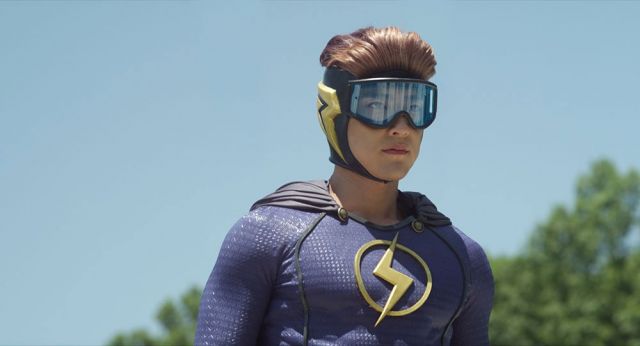 The Bungaeman (played by Jeong Hyeon-jin) derives his powers from lightning. That's about all there is to him really. Even when starring in a film called "Bungaeman", we get almost no backstory explaining who the Lighting Man is, or where he came from. Instead, the focus is on Han-na (played by Luna), a scientist who dreams of flight via jetpack and sings songs. Then there's the Distinguished Devil (played by Song Wook-kyung) who wants to steal the Bungaeman's powers for some reason. Also he sings songs.

For context's sake, I need to note that there is a Bungaeman TV show. It's aimed at children, and features the same characters in similar archetypal roles out on stage acting all goofy and singing songs. But "Bungaeman" does not utilize this format. At least not directly. Instead of taking place on a normal theatrical stage, the production takes places on huge sound stages buffered by green screen effects. As a result "Bungaeman" feels rather unsettingly empty.

Even on the theater set, the largest and best decorated of the bunch with the most characters, there's a whole lot of empty space. There's no audience. So when Han-na gets a big musical number that involves rocking out with the Distinguished Devil's henchmen, there's this sense that she's just screaming out to the void. Which in a sense she is, considering the next scene involves Han-na literally going into the void for reasons that don't really make sense and I'm not going to try and explain them.

A lot of "Bungaeman" is just weird in these subtly unsettling ways. Another sound stage involves a huge tank owned by the Distinguished Devil. There's a brief animated sequence that depicts the Distinguished Devil using his powers to set the world ablaze. Yet by the end we appear to have wrapped around to the notion that "Bungaeman" is a sort of prequel to the TV show, back before the characters were performers. Although even before they were performers, the characters still wore weird costumes.

...It really is too easy to overthink children's media, isn't it? Watching "Bungaeman" shortly after "Pororo, Cyberspace Adventure", I was also struck by how most of the characters were just generic friends to the actual leads, even fulfilling some of the same comic relief roles. The small one. The big one. The woman. Their limited personalities are just foils, of course, and their presence in the movie at all is justified solely by their existence in the TV show.

Unlike Pororo, though, Bungaeman lacks much international access. So I imagine for most readers, "Bungaeman" will just be a mildly amusing novelty. It's the concept of superhero movie distilled to the most accurate form- children's entertainment on a scale so large it obviously does not fit. Well, given that the director is Jo Geun-hyeon (of "Late Spring" and "26 Years", apparently), I suppose that's not such a big surprise.