[HanCinema's Film Review] "Bungee Jumping of Their Own" 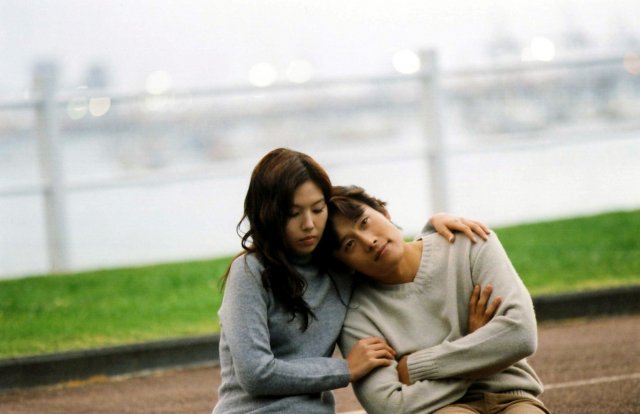 In-woo (played by Lee Byung-hun) is a big dumb lovable oaf. "Bungee Jumping of their Own" starts off pretty straightforwardly as a nostalgic representation of his big college romance in 1983 with Tae-hee (played Lee Eun-joo) who, like In-woo, is shy and a little silly. Flash forward to the present day, 2000 because this is an older movie, and In-woo now has a wife played by Jeon Mi-sun. And wow, is this character sure fraught with a lot of issues.

For starters, In-woo's wife doesn't actually have a name. She and their uncredited daughter exist for the sole purpose of showing how much In-woo is willing to sacrifice to get Tae-hee back. This is incredibly messed up. In-woo's wife is by far the most sympathetic character in the movie, with the most compelling and nuanced performance. Her heart is shattered by the discovery that her husband apparently never really loved her, and is capable of monstrously violent actions under the right emotional stress.

And about that performance- if you recognized the name Jeon Mi-sun, it may have been because she killed herself two years ago. The approach "Bungee Jumping of their Own" takes toward death and reincarnation is, in that context, just a tad problematic. "Bungee Jumping of their Own" is very much a movie that could never be made today in part because the suicide rate has spiked so much over the last twenty years that the film's overly romantic messaging on that subject matter would be seen as socially irresponsible.

It's strange to think how many artistic accolades "Bungee Jumping of their Own" has accumulated over the years for the exact opposite reason, namely the belief that it has a positive interpretation of LGBT issues. Which I kind of guess it does, in that characters are shown to engage in homophobic behavior, and that behavior is presented negatively. But then you have to ignore the fact there are maybe a dozen reasons why In-woo's actions are horrifically unethical and morally fraught.

The gay stuff is actually fairly convenient in the greater context of the narrative, because by having characters focus on that aspect of In-woo's personality shift, there's no need to address the other issues. But personally speaking, I couldn't just ignore that stuff just because director Kim Dae-sung uses sleight of hand to try and tell a story of timeless love. If timeless love means destroying the lives of everyone I know and care about, I want no part of it.

"Bungee Jumping of their Own" is an example of a classic movie that can get far on mood and ambience alone. There's a superb sweetness to the 1983 backdrop, and Lee Byung-hun turns in a strong performance as a man who allows himself to be destroyed by his own nostalgia. But then that's part of the problem. The movie never actually acknowledges that's what's happening. So what should be a precautionary tale about fixating too much about the past instead becomes a story about how it's OK to let the universe bully you into committing evil acts.