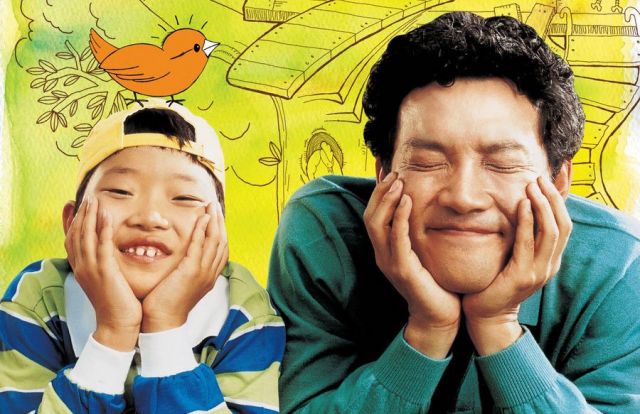 Dong-goo (played by Choi Woo-hyuk) is a dimwitted child who goes to school with a smile on his face and a beat in his step every day because he has the very important job of being the designated water carrier for his classroom. It is not a high prestige job. The other kids don't like carrying water because it's heavy but Dong-goo doesn't care because it's one of the few tasks at school he knows how to do. Joon-tae (played by Yun Chan) sits at the other half of Dong-gu's desk, and resents Dong-gu's oblivious joy for life.

"Bunt" is a generally sweet, uncomplicated story about how retarded kids are people too. Strictly speaking I think Dong-goo might actually be autistic, given how he's able to do certain simple, intensive repetitive acts with a high amount of skill. It's just the more complicated deviations from routine that throw the little guy for a loop. Dong-goo can take any degree of verbal abuse indefinitely, but he processes everything else via limited analogies to water kettles. It's the only way to make him mad.

Aside from that, Dong-goo is kind-hearted to a fault, and it's initially difficult to see why Joon-tae dislikes him so much. The answer to that question boils down to simple kid logic. There's something slightly offensive about how Dong-goo has an athlete's body yet shows no hope of being able to live up to that promise. There's social commentary sprinkled throughout "Bunt" in this vein- Dong-goo is a great kid who is looked down upon solely for being different, and he's too dumb to even realize people are mocking him.

Even adults don't really get Dong-goo, which puts "Bunt" in the interesting position of having Joon-tae be the one to ultimately guide Dong-goo to success rather than an authority figure. As much criticism as South Korea gets in the abstract for hierarchal cultural systems, I always find it fascinating to see movies like "Bunt" where adults are neither good or bad. They're just clueless, and it's only by making a serious effort that issues like the existence of a special needs child can be resolved.

In more adult matters, Jin-gyoo (played by Jung Jin-young) is Dong-goo's father, a man who struggles to keep his finances in order to the point that he refuses medical tests for fear of the possibly unnecessary short-term expense. Dong-goo has average intelligence but relatively little sense, and he's a good dad mainly by just being there and being a dad. When Dong-goo causes trouble by hitting someone, Jin-yeong very wisely adopts an evasive strategy.

Also there's a subplot regarding mortgages which as far as I can tell was never actually resolved. "Bunt" is not a terribly amibitious movie, setting its sights very low by giving Dong-goo a goal to strive for without allowing him the intelligence necessary to achieve it himself. In this way, Dong-goo is only able to get along with the help of his friends. That's the kind of backdrop necesary for a miracle to really actually feel like a miracle, and "Bunt" acquits itself well on this point.