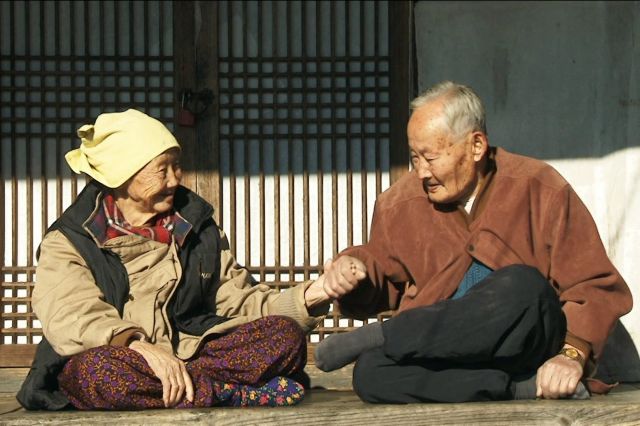 In the southeastern region of of Korea, an elderly man returns to his rural home. In truth he probably can't stay there long and family will come back for him in two weeks. The old house holds great nostalgic value for him. Over eight decades, the man lived there with his wife, taking care of her when he could barely take care of himself. "Butterfly" is a documentary chronicle of the end of their shared life, as we wait for the old woman to die on her own terms.

Elderly relatives who don't want to move are very much a thing in modern culture for the younger generations. I myself have had grandparents like this, and at times it was hard to grasp their attitude. Watching "Butterfly" though it's easy to see the appeal in the simplicity. Neither member of the old married couple ever really has much to do. So consequently, when simple tasks take a tediously long time in winter, it's never a big deal, because there's so much time left in the day.

There's also a strong sense of relaxed loving serenity in how the old man never sees any of this as being a huge imposition. I imagine many viewers, spoiled by modern forms of sanitation, will express discomfort at scenes where the old man must empty and clean the bucket which his wife...defecates in. But then there's the rub. While the sit-down toilet may be a marvel of modern engineering it is of little use to a person who has trouble standing up and sitting down.

There's also great comfort in the living space which the couple inhabit, and all its familiarity. I liked the old couple's indifference to how seasonal change affects the landscape. Their neighborhood is actually a very beautiful place, yet director Choi Jeong-woo is always careful to share their feeling of understatement. To them, the natural passage of seasons, and night into day, are just normal everyday pleasures. Even in change the constancy of their lives is the more obvious reaction.

There's a lot to envy in their love story too. While the old woman dwells on the annoyance her state of incapatication must be having on her husband, in other moments they'll have casual conversation about reincarnation. These beliefs further underscore why these two want to live together for as long as they can. They're thinking that, whatever comes next, this is all they'll have of each other in this world. So they better try to enjoy it as much as possible.

For those who found "My Love, Don't Cross That River" to be a tad sentimental and sappy, "Butterfly" offers a more holistic vision of what life and love look like in the far, far distant term. The documentary is only a little longer than an hour, and heavy dialect notwithstanding is quite parsable. For all the difficulties of their last years together, it's easy to look at the old couple in "Butterfly" and feel a sense of envy.

"Butterfly" is directed by Choi Jeong-woo