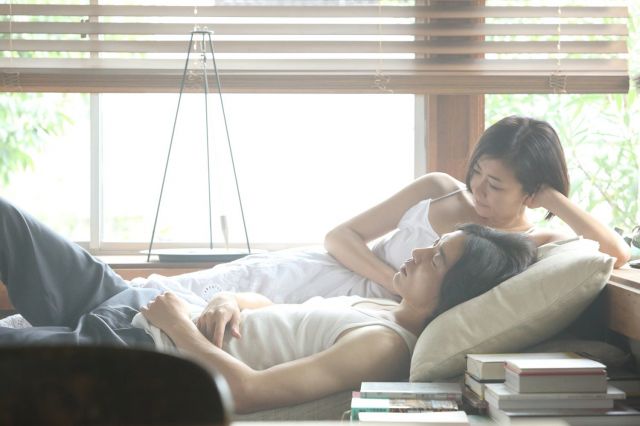 Ryoko (played by Miho Nakayama) is an aging Japanese novelist who has spent her career shying away from interaction with readers. But now? She's teaching a graduate class on creative writing. It's quite some time before we find out what, exactly, is the real reason for the change in her attitude. Until then, Ryoko gets acquainted with Chan-hae (played by Kim Jae-wook), a Korean transfer student who struggles to pay his tuition.

There's a mean joke I'm fond of- that since the main advice for writers is to write what you know, there are an awful lot of mediocre novels about college professors contemplating sexual relationships with younger students. On the surface level "Butterfly Sleep" obviously falls into this trap. After all, writer/director Jeong Jae-eun is herself an aging woman working in an intellectual field- architecture, mostly. She made two (very good) documentaries on the subject.

But "Butterfly Sleep" is not wish fulfillment by any means. Ryoko as a character constantly struggles with feelings of serious regret and ambivalence about her career to date. Ryoko is a solitary woman by nature. Her few past forays into serious relationships, while excellent fodder for character building, did not end well. Though Ryoko has a naturally optimistic and sunny disposition, very little of her actual life experience justifies this attitude. The woman's life mainly consists of solitary reflection in a personal library of obscure books and companionship with her large happy dog.

What's more, Ryoko doesn't really know how to pass on what knowledge she has, because her writing is so naturalistic, and her grasp of how it even works is constantly fading. That's the context into which her relationship with Chan-hae is relevant. Chan-hae can't learn in an academic setting because of the haphazard way his life is organized. Like Ryoko, he gets bursts of inspiration from dreams. And as Ryoko listens to Chan-hae's observations, she better understands how vastly different his existential conception is as a modern man compared to hers as a woman of the last generation.

Note that Ryoko and Chan-hae never talk to each other anywhere near that directly- because artistic talent notwithstanding, they are both bad communicators. That's why they're so interested in writing. They can't think of a better way to communicate. It wasn't even obvious to me that either Ryoko or Chan-hae were even lonely until maybe halfway through the movie, because both of them are so good at even convincing themselves that their lifestyles are acceptable, even when faced with mounting proof that life as they know it is becoming unsustainable.

Their heartbreak proves moving precisely because it is so inevitable. Writing is, for Ryoko and Chan-hae, a way of moving on that predates the actual physical process of moving on. Writing to them allows them to come to terms with the fact their world will never be the same, and in time all they will have is a fleeting glimpse of memory. Call that tragic melodrama if you want- but it's a fate that will slowly yet surely strike us all.