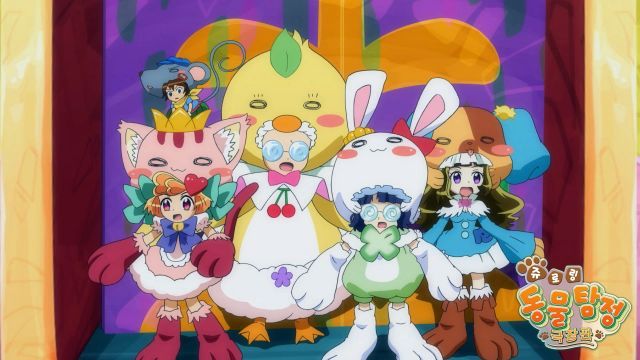 So, there's a bunch of kids. Two of them, one boy and one girl, are very assertive and constantly gets into fights. Another two, also one boy and one girl, wear very goofy glasses and have a much more subdued personality. A fifth one is much older than the rest and serves as the helpful older sister type. What they all have in common is the ability to transform first into a weird hybrid animal form, and then into a full on animal. With this power, they solve mysteries.

At least I presume that's what they do. "Change Zoororing Showcase" is fairly obviously just a feature length version of a normal children's cartoon. All the right hallmarks are there. There's the the team filled with characters who have colorful, distinct personalities. There's the the palette, which is extremely bright and flashy and filled with cute character designs and lots of animals. And there's the story structure, which is simply defined enough for a child to understand while still leading up to a family friendly moral.

That's one of the more interesting flourishes, actually, is how well-rounded and nice "Change Zoororing Showcase" is. There's not anyone that could really be called a serious villain by the end. There is a bad guy who is responsible for the apparent kidnapping of a large number of animals- he only really shows up at the last minute though. The guy also reforms rather easily, perhaps because his initial motive was sort of noble, even if he rather poorly failed to grasp the true meaning of animal companionship.

I should probably make it especially clear though - "Change Zoororing Showcase" is a cartoon for children. The mystery, while decently constructed, isn't all that deep. The concept and general design are fairly standard. Many characters have fleeting, mostly unexplained appearances that are made coherent mostly by the way they stick to clearly defined archetypes.

For all these reasons I'm hard-pressed to come up with any good reason why an adult should watch this movie. Absent the presence of kids anyway. To a child with a normal taste "Change Zoororing Showcase" should be decent enough and fun. To an adult who has to watch movies with their child, the mostly inoffensive content coupled with decent production values and cute presentation should be enough to make the movie tolerable, if not objectively enjoyable. While "Change Zoororing Showcase" won't go down as a gamechanger in feature length animation, it's a decent enough placeholder.