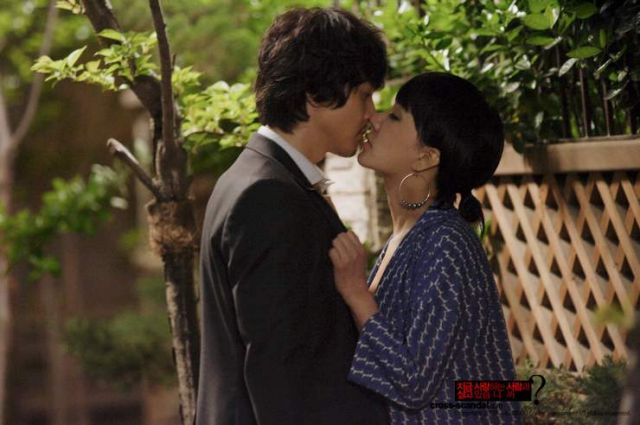 Yoo-na (played by Uhm Jung-hwa) is a generally cranky fashion consultant with a laidback upbeat hotelier husband by the name of Min-jae (played by Park Yong-woo). By chance, they meet a younger couple. Yeong-joon (played by Lee Dong-gun) is a rude businessman with a reputation for accomplishment whereas his wife So-yeo (played by Han Chae-young) works with lighting, and enjoys the small beauties in life. If you thought these couples are mismatched, worry not. Before long the couples themselves also see the irony, and go about the process of "Changing Partners".

The process is not so self-involved as it may sound. What's weird about both of the marriages is how all the participants are surprisingly nonchalant when it comes to the prospect of adultery. Ripped from context, the time Yoo-na/Yeong-joon and Min-jae/So-yeo spend with each other looks like something out of a classy romantic comedy, where characters are making a conscious decision to escalate or disavow further flirtation. The existence of spouses, oddly enough, is of an especially minimal consideration.

Consequently "Changing Partners" comes off as a sort of Platonic ideal of harmless adultery. The screenplay is deliberately contrived to prevent any kind of meaningful obstacles to come between the romantic pairing save for the mild inconvenience of their pre-existing spouses and lives. The swap is the main element that ties it all together. No one is unhappy. The new pairings are obviously much better than the old ones. So who are we to judge?

Note how neither couple even goes into their evening with so much as a mild hope of hanky panky, simply because they don't know each other that well. Yoo-na and Yeong-joon actually dislike each other initially because they both have dominant personalities. What breaks down that barrier of antipathy is that all too rare spark of genuine emotional connection. Min-jae and So-yeo, too, bond over external aesthetics rather than personal appearance.

So what happens if, for whatever reason, you've already made that commitment in life to another person and then someone obviously much better shows up? As passionate and destined as "Changing Partners" makes its couples look, it never comes up with a convincing answer to this question. Emotional entanglement, messy though it may be in practice, is appealing precisely because it seems to make life simple. Love creates inner peace and implausible though it may seem, by the end of "Changing Partners" that peace remains largely intact.

It's quite odd, in that way, how a movie can explicitly be about extramarital affairs while not even being very exciting. Even the sex scenes have this very relaxing feel about them as if the main characters stumbled into this situation because it was easier than not cheating on their spouses. There's no guilt or shame, just a very strong level of comfort and even relief, in knowing that such complications can exist without necessitating wholesale destruction of all parties involved. I would not try this at home, but I would watch "Changing Partners" again just to softly ponder on these matters some more.