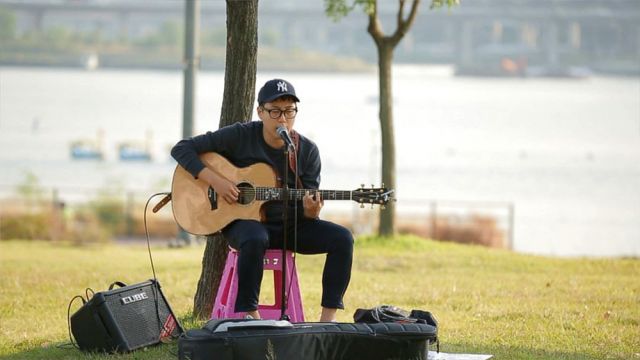 And that's pretty much it. "Cherry Blossoms, Again" was financed in part by MBC, so this is a documentary in the television mold, where the focus is on being purely informational rather than making any kind of grander artistic or philosophical point. Jang Beom-june lives a normal life. Apparently he's even married with a daughter. The wife we never get to see, even if Jang Beom-june begs her to come home early at one point.

If there's any greater point being made in "Cherry Blossoms, Again", it's that Jang Beom-june is a perfectly normal guy who believes that aesthetically pleasing music is a joy to be shared with everyone. Sure, it's the music downloads that pay the bills, but Jang Beom-june stubbornly refuses to confine himself to a studio, instead making sure to wander around to various small studios or outdoor parks to just relax and jam relaxing music to the passersby.

On general principle, Jang Beom-june wants people to chill out. That seems to be his mission in life, anyway, and it's reassuring to see that he practices what he preaches. An early scene, where he wanders around Cheonan nonchalantly pointing out the houses of all his ex-girlfriends, is weirdly funny because in any other context a person acting like that would seem like a psycho. But Jang Beom-june is right there laughing along with everyone else, having only just now noticed this somewhat unsettling coincidence.

The reason why this came up in the first place is that, as a songwriter who writes a lot of love songs, the love life of Jang Beom-june is relevant. But to protect the names of the innocent, we get no particularly detailed information about Jang Beom-june's life or even how Busker Busker worked as a unit aside from this vague idea of how they were a large group of college students who, as college students often do, drifted in and out of the band as the minutae of life dictates.

The actual content of "Cherry Blossoms, Again" is rather lacking, and it bears a lot of structural similarities to the typical SMTown documentary. The only apparent point is for us to recognize that Jang Beom-june is a fairly cool dude who lives a normal straight edge life and his team would really appreciate it if you bought his music. I see nothing offensive about this idea, considering that Jang Beom-june's music is pretty good and certainly worth whatever he's asking for it. So, too, is this documentary, which supplements its replay of Jang Beom-june's discography with a useful glimpse into the life of a well-known but not especially famous indie musician.