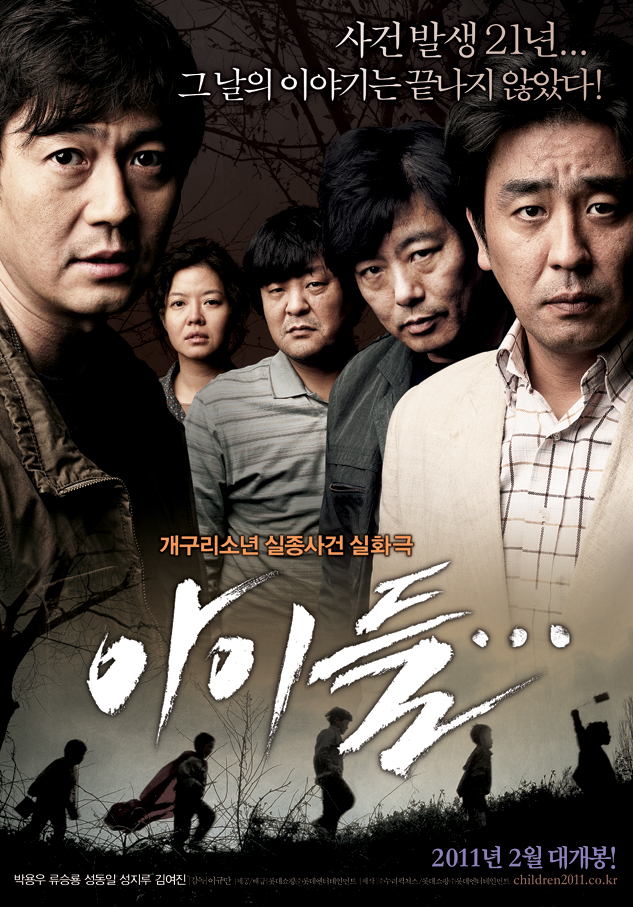 In 1991 five country boys ventured out into the mountains to catch salamanders and were never seen again. Their bodies were then discovered in 2004 but investigators were still unable to determine exactly why these young lives were prematurely taken. Now, in 2011, Lee Kyoo-man brings us "Children...", a crime thriller that is currently dominating at the top of the Korean box office.

Director and scriptwriter Lee Kyoo-man first made a name for himself when he won the grand prix at the Korea Motion Picture Festival with his independent film "Despair". And in 2007 he released "Wide Awake", a mystery thriller in which Lee Kyoo-man expressed his directorial interest in the thriller genre. With the "frog boys" true story as fodder, Lee Kyoo-man has presented the boys' story from an interesting perspective that sways between fact and fiction.

The Story and Characters

Unlike the 1992 film "Come Back Frog Boys", this film tells the story of a discredited documentary producer (Park Yong-woo as Kang Ji-seung) as he attempts to get his career back on tracks. Kang Ji-seung finds himself back in Daegu having been exposed as a fraud in his previous documentary. He discovers a taped interview from professor Hwang Woo-hyeok (Ryoo Seoung-yong), in which the professor alludes to inconsistencies in some of the parents' statements and actions. Hungry for a controversial angle on a breakthrough story, Kang Ji-seung persuades the professor to explore with him the hypothesis that the boys' parents were somehow involved in the tragedy.

The two's investigation is shunned by the local detective and their insinuations are frowned upon by the parents and the local community. Despite this, the producer and professor examine the discrepancies in the reported accounts given by the parents. The two become engrossed in the possibility that their theories hold merit, with both men hoping that their inquiry will yield career-advancing prospects.

Finally convincing local authorities that one of boys' parents were involved, they gain permission to search the Jong's family home. Under a barrage of journalists, photographers and locals, the professor points out two places under their home where he believes the bodies to be. It's a tense moment as both Kang Ji-seung and the professor put their names on the line in the hope of a discovery. Yet nothing but a young girl's shoe in found, and the two find their credibility as professionals in tatters.

Years later, the detective on the case (Sung Dong-il) provides Kang Ji-seung with the name and address of a possible suspect. This information was provided to Kang off the record, as there was no hard evidence to make a full inquiry. On his own accord, Kang attempts to find the man suspected by the detective. In the suspect's absence, Kang enters his house and discovers that this just might be the man who has eluded capture. However Kang's intrusion does not go unnoticed and the suspect briefly detains Kang's daughter after school to remind him what might happen if he presses matters further.

Kang then confronts him at the cattle slaughterhouse where he works. There he finds more clues that strongly link the suspicious man to the boys' murders. Kang directly engages the man but realises that there is ultimately not enough evidence to prosecute him with the statute of limitations on the case having expired. 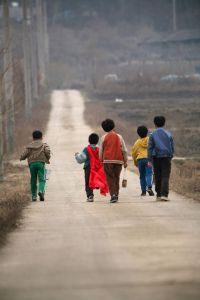 The first half of the film manages to be more factual in terms of the actually accounted events. The day the boys went missing is nicely dramatized and does well to capture the despair and desperation of the parents as they keep hope that their sons are still alive. Our protagonist is also well introduced and framed as an unlikeable manipulator of stories and people. The professor's theories and suspicions are made to seem plausible and, through Lee Kyoo-man's sleek visuals, make the audience believe the two are really on to something. Even the parents themselves are made to seem dubious. It takes a skilled storyteller to invoke such a response when dealing with actual events in a new light.

I made the mistake of watching Bong Joon-ho's "Memories of Murder" (2003) right before watching "Children..." . As a result I was highly unimpressed with how this film concluded. Its sensationalised final scenes planted a false sense of catharsis in me that took away from the whole mystery of the story. "Memories of Murder" was also based on a real unsolved murder, but its conclusion was far more tactful and subtle. In both films the suspect is still at large but in "Children..." we have a definite face to direct our emotions to. I did not enjoy this and it failed to add anything substantial to the film. And as I walk away from the cinema I felt cheated out of a satisfying ending to what was otherwise a great film. Maybe Lee Kyoo-man put too much of himself into Kang Ji-seung's character, because with his sensationalistic choices in the final scenes, the true mystery went out the window.

Please feel free to comment on this review. Discussions are welcomed!