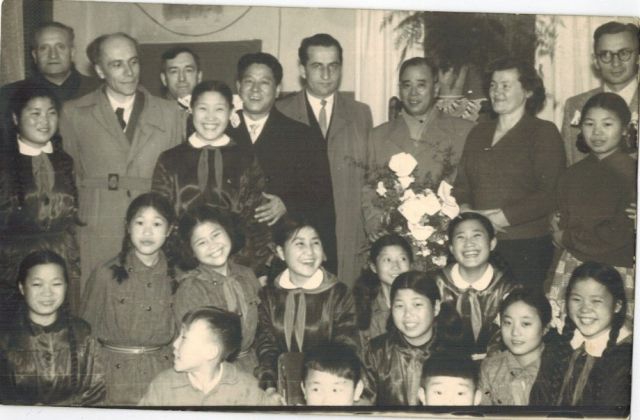 North Korea sent a lot of war orphans to Poland during the Korean War. Allegedly, "Children Gone To Poland" is their story. In practice, the documentary has frustratingly little focus on those orphans. We barely hear anything about them before director Chu Sang-mi is already holding auditions for a young North Korean defector (Lee Song ends up being chosen) to go with her to Poland and find out more.

Aside from the fact that Lee Song has ancestry from North Korea, she has no history with Korean War orphans and no one in her family appears to have gone to Poland. What's worse, the whole audition gives the impression that Lee Song's purpose in the documentary is to be a performer. This makes later scenes involving tears rather awkward, since the question is naturally begged whether said tears were real.

By contrast the firsthand historical material is extremely strong. There are numerous interviews with old Polish people who looked after the orphans, old film footage of what the orphans were doing, and written records of their presence in Poland. All of this historical data is fascinating, and it's brutal watching these now elderly people discuss with startling clarity experiences in their childhood and early adulthood that left a lifelong impact.

Other data is politically dubious. Director Chu Sang-mi, for some odd reason, keeps finding weird and often contradictory ways to find fault with how the North Korean government acted back then. One minute they're bad for not doing more to send war orphans picked up in South Korea back to South Korea. The next, they're cruel for forcing the children to come back to North Korea too.

The horrible circumstances the children were in were more a consequence of generic warfare than ideology. Indeed, considering the sorry state of South Korean war orphans, the efforts made both by the North Koreans and the Polish were quite admirable. One of the darkest interviews depicts how the war orphans, out of sheer habit, would crawl under their beds to sleep because they were terrified of bombs falling in the night.

All of that is brutal and genuinely emotionally affecting, which only leaves me all the more puzzled why so little content in that vein made it into the final cut. At one point Chu Sang-mi and Lee Song go to Auschwitz, a famous name with at best tertiary relevance to the war orphans. Well, maybe there was more, we just don't get to see it because of questionable editing. The credits sequence is loaded with so much intriguing research material I was just left wondering, why didn't the documentary talk about this stuff instead?

The main reason for these shortcomings is probably that director Chu Sang-mi is an actress, not a historian. This explains why she feels the need to frame the story around Lee Song instead of just letting the historical record speak for itself. In that way "Children Gone To Poland" is certainly a crowd-pleaser. But when I watch documentaries I'm looking for educational depth, not emotional manipulation, so I can't rightly recommend this film.

"Children Gone To Poland" is directed by Chu Sang-mi.