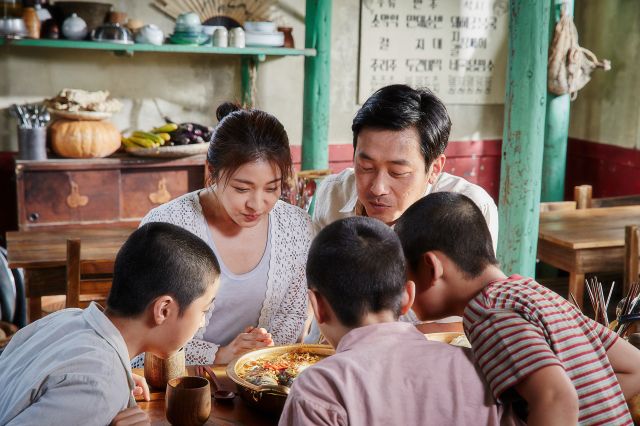 Sam-gwan (played by Ha Jung-woo) is an average guy hanging out in the streets at the end of the Korean War. He becomes thoroughly smitten by the winsome Ok-ran (played by Ha Ji-won), and after an apparently successful first date is unintimidated by the fact that she a boyfriend. Sam-gwan doesn't actually...win her over or anything. He ultimately gains Ok-ran's hand in marriage by approaching her father, who is evidently more impressed by Sam-gwan's plucky earnestness than Ok-ran was.

Hopefully, this little tidbit helps demonstrate how "Chronicle of a Blood Merchant" doesn't exactly adhere all that well to modern standards of sexual politics. Or familial politics for that matter. After the courtship phase of the movie, the greatest bulk of emphasis is placed on how Sam-gwan abuses his son Il-rak (played by Nam Da-reum), on the basis that biological paternity is what's important, not who's actually been raising the kid for the past eleven years.

The original novel on which "Chronicle of a Blood Merchant" is based is, so I've been told, a classic of modern Chinese literature, detailing on a personal level a society in the throes of the Cultural Revolution. From that angle, most of what happens in "Chronicle of a Blood Merchant" makes metaphorical sense. Sam-gwan is rejecting his actual identity as a father based on abstract scientific information concerning what real parentage is. The actual selling of blood itself also well demonstrates the general paradox of modernity. While selling blood is obviously really skeevy, it does provide financial opportunities for the seller and literal life for the recipients.

It's a very good metaphor...for the Cultural Revolution. But "Chronicle of a Blood Merchant" ultimately suffers from its inability to relate proceedings to a particularly Korean context. Whereas "Ode to My Father" makes a point of stating how the story of its protagonist is the story of all Koreans of that age, Sam-gwan's story is just Sam-gwan's story. Even a late plot point which explicitly makes use of the fact that blood salesmanship is going on everywhere is only ever used for the sake of furthering Sam-gwan's character.

And this runs afoul of the fact that Sam-gwan is really kind of a jerk. He bullies Ok-ran into marrying him and then arbitrarily bullies his son, such that until the final act we rarely ever actually get to see Sam-gwan the plucky relatable guy. Bizarrely, Ok-ran's ex-boyfriend comes off as way more sympathetic than seems reasonable, given that his moustache practically screams "snide weasel". He's moved on- why can't everyone else?

All in all this works to make "Chronicle of a Blood Merchant" a very strange product- most actual sixties Korean movies I've seen are easier to relate to than this modern film. I suppose I can give some credit to the performances- Ha Jung-woo is convincing as an average joe, Nam Da-reum does his usual good child acting, and I suppose Ha Ji-won is all right, although she really doesn't factor into the story all that much. Unfortunately, the film can't escape the inherent weirdness and unrelatability of a transplanted international allegory, so ultimately I can't recommend it.

"[HanCinema's Film Review] "Chronicle of a Blood Merchant""
by HanCinema is licensed under a Creative Commons Attribution-Share Alike 3.0 Unported License.