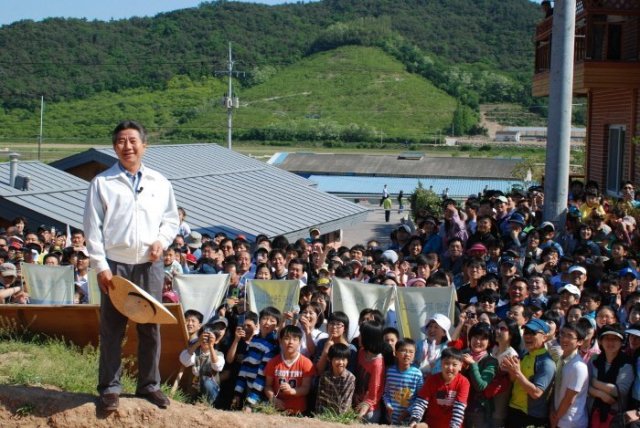 On February 25th South Korean President Roh Moo-hyun retired from the presidency and into private life. His administration had begun with high hopes but had ultimately been mired entirely in political gridlock. Consequently, Roh Moo-hyun was a lonely man who felt like he had failed his supporters. Weirdly enough, Roh Moo-hyun actually seems happier and more productive doing community development in his rural hometown village of Bonga than when he was in theory the most powerful man in the country, simply because he can actually see himself making tangible progress.

The visuals in "Citizen Roh" are striking through their mundanity. There's one moment where Roh Moo-hyun and a bunch of other volunteers are cleaning up a polluted river. They run across a stray net which has so effectively captured such a huge school of fat fish you'd think someone set it deliberately. Roh Moo-hyun takes obvious pleasure in releasing the poor victims of happenstance. Now there's a feeling of basic empathy that you want to see from an elected official.

Another more peculiar hobby horse the documentary shows us is a form of ecological duck farming. The way it works is, you've got rice paddies, and you've got lots of pests that want to eat the rice. Normally you use pesticide. But by teaming up with duck farmers and borrowing ducklings, all of a sudden you have a tiny adorable labor force of hungry little birds swimming around everywhere enjoying themselves at the big bug buffet before going home. In the epilogue we find out that exploitation of this technique has allowed wild bug-eating birds to return to the area as well.

These are all exactly the same kind of conceptually creative locally focused solutions Roh Moo-hyun tried to push as president, only to have his efforts fail in the face of concerted opposition. So watching politics intrude back in on Roh Moo-hyun's life as ex-President feels especially surreal. While Roh Moo-hyun's political opponents cast him as a devious puppetmaster trying to destroy South Korea's political system in exile, in practice, all we see is a lonely old man who makes a web site so he can talk to people.

This casts the movie's final act in a particularly disturbing light. We see the always precarious Roh Moo-hyun relapse on his already meager emotional recovery as he suddenly becomes convinced that he's destroyed everything worth living for. The whole affair proves disgusting- a bitterly cynical conservative government, outraged that normal citizens would dare oppose public policy with massive public marches, drives a sad old man to suicide for the sole purpose of snuffing out hope and optimism.

This proves powerful because whatever Roh Moo-hyun's failures as a president or man, as ex-president we can see him doing what he loved- trying to help people. Think about ex-presidents in South Korea or anywhere else. What do they usually do? Write bestsellers talking about how great they were? Give million dollar speeches to investment bankers? Indulge in narcissistic expensive hobbies? Men and women like that aren't even fit to lick Roh Moo-hyun's shoes.