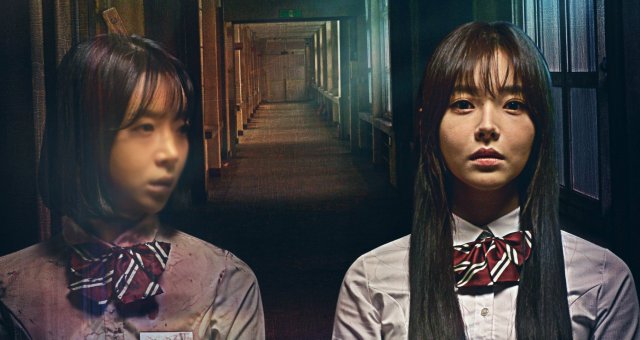 I don't really get what the title "Closed School" is supposed to mean here. The titular institution isn't a school that services students, it's more a psychological manifestation of how the now adult Yoo-ra (played by Chun Yi-seul) continues to feel horrific guilt about her role in the apparent suicide of her high school classmate Mi-ok (played by Lee Yoon-soo). The plot picks up with Yoo-ra meeting the rest of her now adult classmates who remain too emotionally insincere to address their role in Mi-ok's death.

"Closed School" obviously wants to do something more interesting than just standard horror movie tropes by tackling the socially relevant issue of high school bullying. Unfortunately director Choi Hyo-won doesn't really have any ideas for what that might be. One by one we see flashbacks showing what each student did to Mi-ok, before inevitably suffering from some manner of horrific ironic punishment via spectral entity.

The predictability factor in "Closed School" makes the movie feel a lot longer than its eighty minute runtime. I spent much of the early portion impatient for supernatural shenanigans as the characters just stand around in a state of mild panic making very obvious observations. They try to avoid splitting up, but then split up anyway. Not that splitting up makes them any safer mind you, it's just that every ex-student has to get their own special individual ironic punishment.

"Closed School" is so generic it's easier to remember the movie's stronger moments just because they mark a break from the monotony. Director Choi Hyo-won screws around with the coloring every so often, allowing for slow fades into and away from black and white. The effect is spooky but mostly pointless since "Closed School" derives the bulk of its scares from cheap thrills. The frog sequence stands out less because it's impressive and more because it's creative and weird in a distinctive way.

In general the bullying sequences are a lot more cerebral and creepy than the ones involving Mi-ok's ghost, just because they're a lot more relatable. We see Mi-ok being sincerely terrified as the normally assertive girl is physically and emotionally overwhelmed into terror. Most of the supernatural sequences are far less dynamic because we never get to see the bullies experience that same level of fear. Whether better acting, direction, or writing could have fixed this problem I don't know, since all are fairly mediocre.

I did somewhat like the twist ending, even though it's a very technically lazy one, since it serves as a sort of a bridge between guilt and reality. It did kind of get me wondering- why didn't they all just go to the school for nostalgia reasons? Why bother with the car crash at all? That idea wouldn't necessarily be all that more original, but it would be more natural and would better exposit the arrogance and lack of reflection among former bullies who probably remain very unpleasant people to me around. As is "Closed School" is less a bad a movie and more a pointless one.