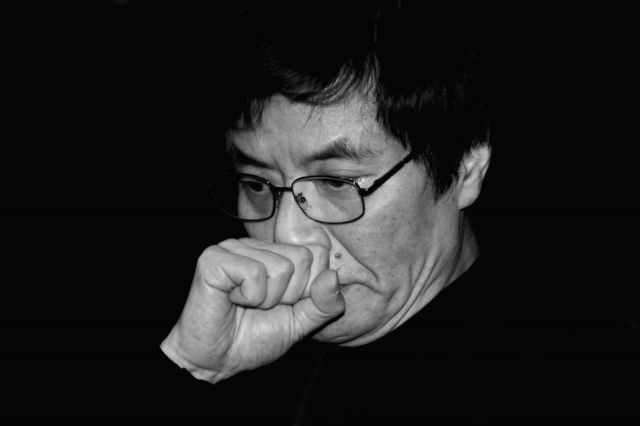 Back in 1991 protest by self-immolation was a recurring form of expression by those who considered the country's new leaders to be indistinguishable from the old ones. In the truly bizarre case of Kim Ki-sul, one such suicidal protestor, the government attempted to deflect attention away from Kim Ki-sul's pro-democracy message by prosecuting Kang Ki-hoon, one of his colleagues, for helping Kim Ki-sul commit suicide by writing his suicide note. "Courtesy to the Nation" is a documentary that goes over the case from inception to long overdue appeal in 2014.

To start out with "Courtesy to the Nation" is mostly a morbid recap of just how tenuous South Korea's allegedly democratic government in the early nineties really was. Director Gwon Gyungwon painstakingly reminds us that turnover in most bureaucratic offices, including that of the prosecutors, was very minimal compared to the explicitly dictatorial era. So it comes as literal surprise to learn that Kang Ki-hoon soon became the victim of petty torture for the sake of extracting a false confession.

The story is striking in how it is simultaneously farcical and horrifying. Kang Ki-hoon is a terribly ineffective scapegoat. Trying to use him to make Kim Ki-sul's suicide seem like a random freak accident simply doesn't work considering the context of the time period. At best all the government could really do was make Kang Ki-hoon seem like an awful human being on the personal level. The experience, while demoralizing and nightmarishly awful for Kang Ki-hoon, didn't accomplish any larger meaningful objective.

The key word there, of course, being meaningful. As the story makes gradual leaps to the present day, we see that quite a few persons officially involved with the Kim Ki-sul suicide case went on to have successful fulfilling careers. These are people who saw nothing objectionable about evidence induced by torture, and plenty objectionable about evidence independently produced through any other verifiable means. These people not only succeeded as bureaucrats, many of them also made serious careers as politicians.

"Courtesy to the Nation" is as much about their political movement as it is about Kang Ki-hoon. These people have staked their entire professional reputations on preserving law and order. Yet there are serious questions whether these people were actually acting in the name of justice or brutalizing random bystanders in hopes of impressing a superior. When pressed on such questions, these people offer a lot of shoulder-shrugging, passive admittance that mistakes happen and saying, is anyone really innocent anyway, when you think about it?

Kang Ki-hoon's case wasn't unusual. At the time it had a lot of press coverage because the main point of contention, the authorship of the suicide note, was at the time difficult to disprove. We get a huge extended list of names at the end of similarly iffy cases that were also thrown out without prejudice on appeal, because South Korean courts have refused to recognize a pattern of malice in these cases. Apparently all these prosecutors somehow manage to be incompetent in exactly the same way. What a coincidence, right?

"Courtesy to the Nation" is directed by Gwon Gyungwon.

"[HanCinema's Film Review] "Courtesy to the Nation""
by HanCinema is licensed under a Creative Commons Attribution-Share Alike 3.0 Unported License.