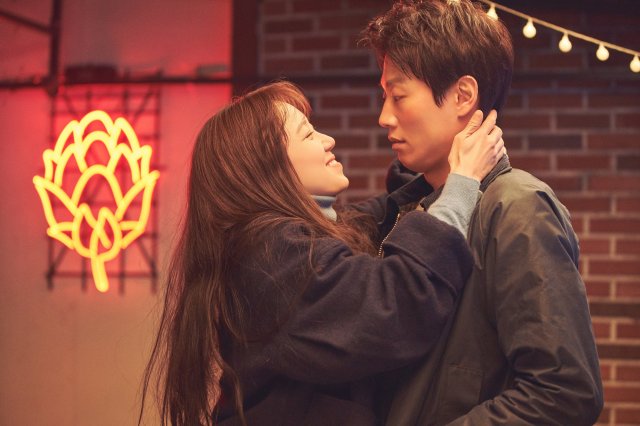 The original Korean title of "Crazy Romance" actually literally translates as the most ordinary romance. The statement is one of dark irony, because "Crazy Romance" is an equally accurate title. Soon-yeong (played by Gong Hyo-jin) is a woman who has chosen a life of romantic cynicism. Jae-hoon (played by Kim Rae-won) has had romantic cynicism thrust upon him. Together, they get very drunk, not because they are looking for a romantic partner, but as a humorous coping mechanism for their real world problems.

The banter they engage in is neither overly cute nor is it particularly self-servingly pathetic. To the contrary, Jae-hoon's character arc revolves entirely around his refusal to engage with his own self-pity. He's constantly on his guard against Soon-yeong, to the point that he provokes himself into an overly drunken state so that he can more effectively approach her. The inherently inappropriate nature both of his text messages as well their office relationship in general makes her a surprisingly safe person to confide in.

But lest we think of Jae-hoon's actions as sexual harassment, director Kim Han-gyul rather deftly makes the argument that it's less sexual commentary persay that upsets women in the workplace and more the overall context. In the scene where Jae-hoon and Soon-yeong first meet we see Soon-yeong unexpectedly assaulted by social pressures. "Crazy Romance" correctly notes that such gestures are highly manipulative in a public setting, and it's very gratifying to watch her break down piece by piece how certain men are too stupid to take even explicit explanations, let alone subtle hints.

Soon-yeong herself is a surprisingly passive character in the story in spite of her aggressive personality and dominant screen presence. She's basically the same person at the beginning of the movie as she is at the end. The main thing Soon-yeong gets out of being with Jae-hoon is that he's a man who actually listens to her. Soon-yeong's blunt insights into relationships from the female perspective are exactly what Jae-hoon needs to get out of his rut.

Elsewhere Soon-yeong and Jae-hoon's co-workers constantly straggle the line from quirky to neurotic to just plain mean. They are neither trustworthy nor evil, which is awkward for the narrative as it leaves no room for clear villains. But this also works equally excellently for the movie's deliberate parallels to real life where people generally do not have the luxury of solving their problems with wacky montages, though the effect can be simulated somewhat with liquor.

In addition to being quite funny a lot of the jokes also double as thematic details. A brief snarly anecdote about an unreliable man and his aftermath goes to show how Soon-yeong's disbelief in marriage is justified, and does not appear to have dissipated by the movie's end. The running gag of the cat in Jae-hoon's house doubles as a metaphor for how he tolerates unwanted attachments. The drinking games...are just drinking games as far as I can tell. And boy do our lead characters look foolish playing them.