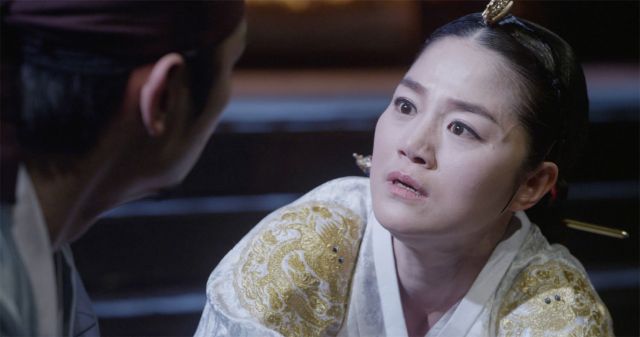 Historical Korean television and film dramas have a tendency to give an epic narrative flare to history. Even the pseudo-documentary style of "Jing Bi-rok" is often subject to this. With "Crown Princess Hong", though, we're looking at the topic from a very different angle- the modern Korean stage. The perspective too is quite warped. The disturbing story of Prince Sado is nothing new, but from the perspective of Hong (played by Kim So-hee), this isn't just the tale of how Prince Sado lost his mind. It's about Hong herself has become emotionally shaken by these events.

The presentation is frequently spooky. Close-ups notwithstanding for the most part the camera is just focused on the stage. Frequently creepy effects are created not by machines but spectrally dressed ghouls, whose hands and shadows dance about on the stage, creating the effect that Hong is trapped in a pit of madness. The worst of it is that Hong does not, herself, appear to be insane. That's what makes the backdrop so frequently terrifying. Hong knows what should and should not be.

Well, there's that, and the royal intrigue itself. Hong is not that important a person in palace politics, and even if Sado is the only person who's literally crazy, his madness is quietly but cruelly enabled by the abusive behavior of the higher-ranked members of the royal family who demand complete obedience in all levels. The end of the story is well known- precisely because Hong documented it. And as "Crown Princess Hong" demonstrates, dredging up these horrible memories could not have possibly been good for her mental health.

On the technical level "Crown Princess Hong" has many other strange bits of effectiveness. There's unusually strong emphasis on speech, for example. The early scenes frequently feel like a radio drama, because there's little in the way of visuals and the focus on dialogue is just that intense. Even when the film delves into summary description, there's a bewitching quality in the sheer force of the performer's voices.

But then, "Crown Princess Hong" isn't really a film at all is it? It's a play, and I am not a theater critic. So while I was often overpowered by the freakish novelty in the presentation, I can't say for certain whether it's all that unusual or significant in the Korean stage. On the flip side I had no idea anyone in Korea was even producing theater like this. Listen to that orchestra- composed entirely of traditional Korean instruments. Ostensibly this is to enmesh the viewer in the fanfare of royalty. Yet as the delusions increase, the unusual cacophony of the music takes on a subtly terrifying nightmarish hue.

"Crown Princess Hong" is a deeply disturbing product that gives us a personal, emotional portrait of history rarely seen. The theatrical format somewhat perversely shows a more creative expansive than most film, simply because the production has to look at matters through a more visceral angle. Who needs detail when shadows imply everything? Who needs nuance when the performers have such powerful voices? For these reasons and more "Crown Princess Hong" is a high class production most definitely worth seeing.