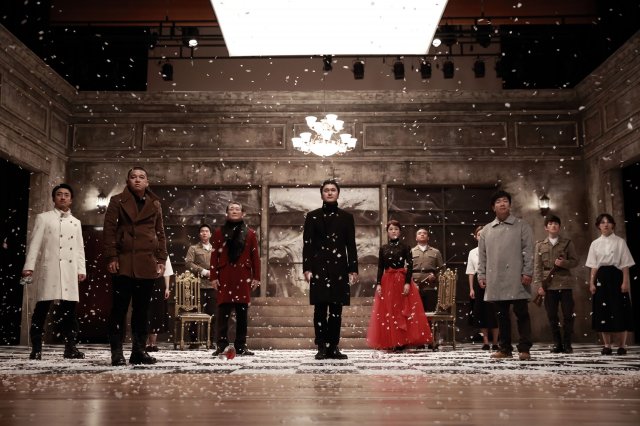 "Curtain Call" shows a lot of potential at the start as it contrasts the lofty ambitions of troupe director Min-ki (played by Jang Hyun-sung), with the reality of his current career. The premise even inverts the usual wacky scheme to save the theater trope by having Min-ki's big inspiration be the idea to actually put on a serious play, Hamlet. Strangely enough in practice "Curtain Call" doesn't actually have a broader conflict. By and large the movie is just the story of how Min-ki's Hamlet went horribly wrong.

"Curtain Call" wants to be a farce. Everything from the set-up, the situations, to the performances, to the jokes, clearly suggests that the movie should not be taken seriously. And yet director Ryu Hoon-I, as well as the characters themselves take the story just seriously enough that the movie can't settle into a consistent tone. When one scene in Hamlet goes wrong and results in Hamlet's apparent death, the obvious continuity problems this creates are briefly acknowledged, then somehow ignored.

At times "Curtain Call" can be quite funny, if incomprehensible. There's no good way to translate gags wherein one character starts using the intonation of a traditional Korean silent film narrator, or when another breaks character and lapses into an obscure rural dialect. But such jokes are still amusing because of powerful delivery and apparent sincerity. I also really loved the scene wherein the characters are forced to deal with Hamlet's vengeful ghost, the whole sequence feeling just barely plausible enough that the in-film audience could believe it was scripted.

But rather than commit to these ideas, and having the troupe just make up their own version of Hamlet, the production team feels the inexplicable need to venerate Shakespeare's work while obviously not understanding it. I was baffled by one plot point which implied that Ophelia was a better role than Gertrude. Or, for that matter, by how no one seemed to realize that Gertrude's name rather famously does not appear in the play's actual dialog, so of course the audience wouldn't know it.

The way "Curtain Call" is at times either about the troupe, the farce, or the great dignity of acting really threw me off. The movie probably could've tackled two of these ideas with a decent degree of competence but going after all three at once just muddled everything. In the end several scattered strong concepts and setpieces aren't enough to save "Curtain Call" from mediocrity, mainly because they don't tie together properly.