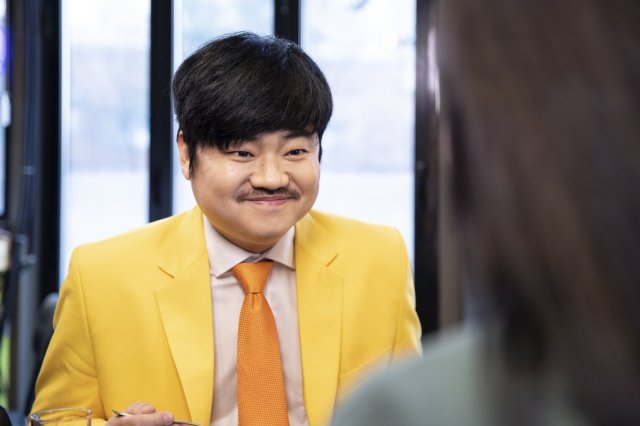 Gi-seong (played by Shin Min-jae) is the atypical "Cute Man" promised by the movie's title. He uses his harmless, pathetic charms to sell housewives on educational material. Gi-seong's profession has surprisingly little to do with the rest of the movie, though. That opening scene is merely the start to a convoluted series of events that leads the divorced father to start dating Il-yeong (played by Lee Jin-ri), a woman amenable to the nonintuitive charms of a divorced father.

Speaking of which, Gi-seong has a teenaged daughter Jin-joo (played by Hong Ha-na-im) who lives with her mom. Despite never really being all that nice to her dad, we're led to believe that Gi-seong likes her mom even less. And in what has to be one of the better jokes I completely failed to notice until after the movie was over, Gi-seong herself is dating a teenager with a similar temperament to Gi-seong. This adds a very funny layer to the subplot of Gi-seong sternly trying to warn her about safe sex with boys who can't be trusted.

I really would have preferred it if "Cute Man" could have just stuck to this rather nontraditional reimagining of the love triangle. The best scene by far involves all three leads meeting together at the recurring location of the fried chicken restaurant. Jin-joo keeps trying to pick a fight with Il-yeong and it's not at all clear why. The meek adult characters have no idea how to deal with Jin-joo's sense of impropriety. They're delightfully clueless- their main redeeming qualities.

Alas, what could have been a fairly diverting short romantic comedy is dragged out entirely too much by a real estate loan shark subplot. The reason why this subplot is exists is because Gi-seong is motivated to try and bring his family back together with a bigger apartment. This naivete is certainly in character, but it doesn't exactly make for a satisfying resolution since the tone of the script is completely at odds with the sense of danger prompted by this gangster thriller plotting.

I was disappointed mainly in how director Kim Jeong-wook-I didn't seem to have much faith in his leads to carry a romance all by themselves, despite their great awkward dork chemistry. Or maybe he was worried that altering the famed Lee Byeong-heon-I's script too much would result in a loss of investors. This is far from an unreasonable fear, given that "Cute Man" appears to have been filmed for the cheap throughout Paju.

It's hard to tell whether "Cute Man" was filmed during COVID-19 or whether the sad, desolate setting was an intentional flourish. Either way the contrast is excellent. Gi-seong is a schlubby man in a cruel world who can barely even talk himself into asking a woman on a date, but goodness gracious it's impressive how hard he tries. I wanted Gi-seong to succeed. That's "Cute Man" at its greatest. But then the challenges grew too strong for Gi-seong to plausibly overcome. That's "Cute Man" at its worst.