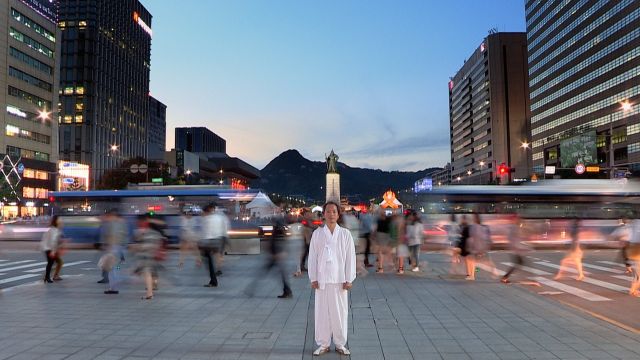 What is the purpose of artistic interpretive dance? That's kind of an unfairly open-ended question. You might as well ask what the purpose of art is. Nonetheless, director Choi Sang-jin attempts to answer this question by looking over the life of Lee Sam-heon, a man who once dreamed of ballet. Lee Sam-heon modified his ambitions in response to the Gwangju Uprising, having concluded that the power of artistic interpretive dance can and should be used to further the cause of social justice.

In general I don't like the idea of social messaging in media, mostly because the usual dumb thinkpieces completely lose sight of how most of our entertainment is an explicitly commercial enterprise intended to sell merchandise. "Dances with the Wind" is a weird case in that Lee Sam-heon abandoned the possibility of media respectability in order to stage complicated traditional Korean shaman style dances at political rallies. If you've ever been to a South Korean leftist political rally and saw a guy dancing, it was probably him.

I have. I think. It's hard to tell because I never stick around the dance performances that long because I don't really get them. "Dances with the Wind" does explain some how Lee Sam-heon's dances work. It's pantomine in fluid dance form, mimicking the suffering that real people experienced from such and such act of political brutality. There's a lot more range than you would think, since pretty much any form of gross negligence on the part of the government (see: Sewol) feels like political brutality when you're a victim.

Beyond South Korean leftism or even Lee Sam-heon's life story much of "Dances with the Wind" is just dedicated to Lee Sam-heon's cross-continental road trip. He meets local cultures- not tourist friendly stuff, more like the foreigner who sells ethnic food at Lake Baikal, or traditional festivals, or lesser known prison camps, or communes. Then, when the opportunity presents itself, Lee Sam-heon offers one of his own unique traditionally Korean styled one man performances.

It's hard to shake the feeling that the guy is just a little crazy. All the same, it's difficult to ignore the sheer strength of Lee Sam-heon's passion. He'll dance for a crowd, a small group, or even a single person just so long as the message is getting across. Writing as a generally cynical person myself, it's easy to admire the guy for simultaneously embodying the horror of the world around him while also enjoying every opportunity he has to meet and become friends with other seemingly random alien persons.

The more I think about it the less sure I am who "Dances with the Wind" is even supposed to be for. It's like watching the backstory of the life of a street preacher. Not, you know, a crazy one, but one of the nice ones who will offer you a spot of tea before trying to tell you the good news. The kind that makes even normal Christians uncomfortable sometimes. For better or worse, Lee Sam-heon is that guy in the religion of artistic interpretive dance.

"Dances with the Wind" is directed by Choi Sang-jin and narrated by Bae Jong-ok.

"[HanCinema's Film Review] "Dances with the Wind""
by HanCinema is licensed under a Creative Commons Attribution-Share Alike 3.0 Unported License.