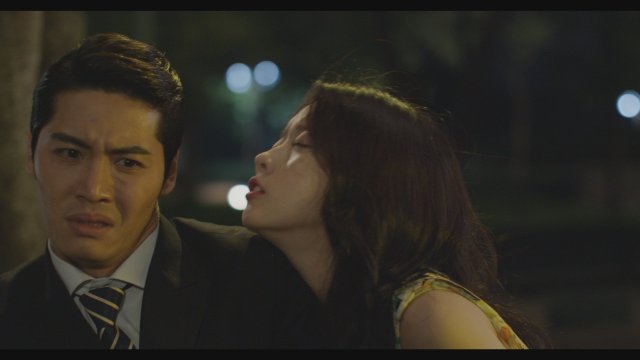 Dong-jae (played by Lee Kwan-hoon) is a male escort. We know this because "Dancing With Ghosts" has barely even begun when we're treated to several minutes of him having sex with a woman who appears to be undergoing the experience solely to see her own expression in the mirror. Dong-jae's existence isn't entirely unpleasant. He has financial security. Yet it feels awfully bleak, to the point that a chance encounter with Yoo-jin (played by Joo Min-ha) does wonders for his mood, in spite of the fact that she's a ghost.

Granted, the overall set-up is kind of funny. Yoo-jin is a virgin ghost, which is to say, that she desperately wants sex, having been denied this in her corporeal life. Yoo-jin becomes obsessed with Dong-jae mainly because she thinks he's probably good at it. But her backstory has definite layers. Yoo-jin died as a lonely adult, despite superficially being a beautiful model. It's tragic, yet not interesting. I bring this up to note that this is why Yoo-jin doesn't lead with this story. Yoo-jin lacks self-esteem.

The great irony of this is that for Dong-jae, Yoo-jin was an inspiring image at the darkest time of his life. Yes, the part of his life that was even worse than working as a gigolo. There's a surprisingly subtle subtext here about the unpleasantness of Hell Joseon, with our thirty-ish aged characters suffering from fundamentally unresolvable mental issues. They lack social lives, or even any way to make real friends. So Dong-jae persists in financial security, while Yoo-jin survives by hoping sex will magically save her.

Even the ending exemplifies this theme of bittersweet optimism wherever it can be found. Dong-jae is still an escort, and Yoo-jin is still dead, yet both have decided they're OK with that. There are large parts of "Dancing With Ghosts" that I didn't particularly like. Just on a technical level the sound isn't very good, and Director Baek clearly abuses poor lighting to hide the fact that the environments aren't particularly impressive.