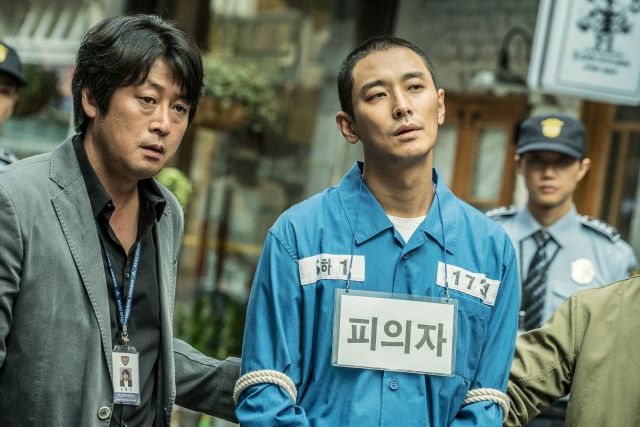 Detective Km Hyeong-min (played by Kim Yun-seok) investigates cold cases in Busan. This work leads him to cross paths with local thug Tae-oh (played by Ju Ji-hoon), a very unpleasant man who brags about violent things he probably never did. And that's where the conflict in "Dark Figure of Crime" comes from. Hyeong-min is willing to deal with the devil if it means bringing closure to the family members of missing persons, and Tae-oh is that devil.

The main immediately impressive thing "Dark Figure of Crime" does is that the story does not romanticize Tae-oh's actions at all. While Tae-oh would obviously like us to believe that he's some sort of psychopathic criminal mastermind, we see pretty consistently that the man is just, well, really petty and obviously starved for attention. As a very realistic story based on an actual real-life case, there's never any absurd clichés suggesting that Tae-oh could, like break out of jail and continue his alleged killing spree.

Indeed, far from getting bogged down in the grisly details, director Kim Tae-gyoon-I keeps us bogged down in the boring tedious way that Hyeong-min gathers information. Hyeong-min tolerates Tae-oh's ridiculous gangster speeches because he's waiting for the occasional useful detail which can be verified outside in the real world. Physical evidence is the only way to distinguish the truth from Tae-oh's bravado- because again, realism is paramount here. Tae-oh wasn't expecting to get arrested, and can't rearrange old evidence to crimes that were committed several years ago.

The strong acting of the main leads is what really makes "Dark Figure of Crime" a stand-out work. I especially liked how Ju Ji-hoon is so consistently able to make Tae-oh seem like a plausible psychopathic killer while still being so consistently unlikable. Tae-oh talks like past murders the way a blowhard at the bar might talk about his great high school days as a football player. Some people might be impressed, but those are really more the kind of stories other people put up with rather than sincerely enjoy.

There's also a dark current of criticism toward South Korea's police embedded here. The main reason Tae-oh's stories are difficult to prove or disprove is because there are a lot of missing people in Busan alone, and detectives like Hyeong-min who are interested in actually investigating these cases are few and far between. "Dark Figure of Crime" is as much a condemnation of official apathy as it is of men like Tae-oh, whose success hinges on scaring authority figures with the prospect that they might make an embarrassing mistake.

He's the kind of criminal we need a lot more of in crime thrillers- one whose success inexorably depends on a dysfunctional justice system. Likewise, we need more cops like Hyeong-min- who struggle with obvious and entirely justified mistrust of his work and plays those exchanges off as divine comedy. "Dark Figure of Crime" plays ambiguity out in the best possible way, recognizing that indifference, more than active evil, is the real dark force opposing justice in the world.