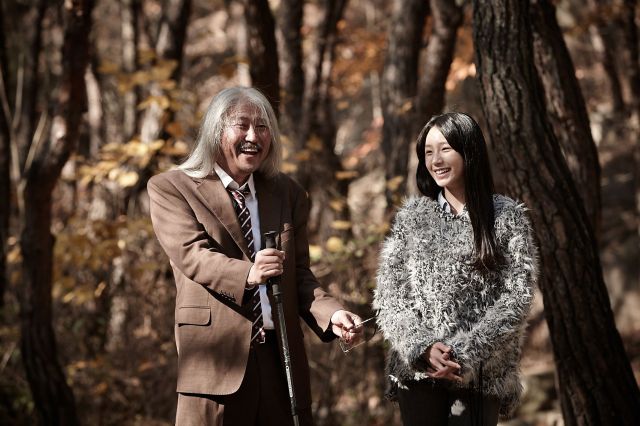 "Day Trip" is a sad, melancholy romp through nature as a dispirited girl prepares to practice for traditional Korean ballads. Of the two films in the Kolon Sport set, "Day Trip' is by far the most evocative of the appeal of nature. Most of the film is little more than loving, panoramic views of the Korean mountainside punctuated by the girl's singing. There's very little set-up, but what little there is is interesting thematically. The girl is upset because she has failed in the human world of competitive singing. She openly laments how practicing in an empty mountain doesn't prepare her for the realities of competition in front of people. But all these worries just sort of fade away when she actually gets into the singing.

The camerawork for this short film is fantastic and shows off all the best parts of nature. The subtle shades and the variation in natural lighting are painfully obvious. I was deeply aware throughout this film about the difference between "Day Trip" and the more heavily restricted sets where nature scenes are normally filmed. "Day Trip" is a true treasure and well worth watching. 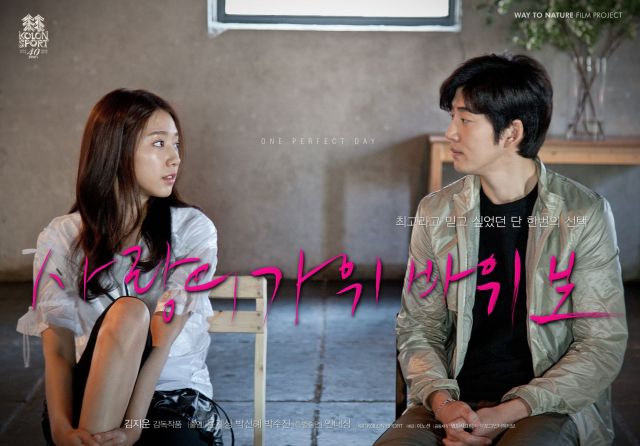 "One Perfect Day" is a different film entirely. Nothing about nature, so far as I could tell, but rather just the story of a somewhat dorky guy named Woon-Cheol (played by Yoon Kye-sang) who's constantly frustrated in his attempts to find love. The longer film of the two, "One Perfect Day" is adorably cute in that we really do want the poor guy to find love, and yet it's just as clear that he's not going to find it anywhere he's looking.

There's a surprising depth to the film's material. The simple game of Rock, Paper, Scissors (and a romantic version of it that involves stairs) is used as a metaphor that explains why our lead character, in spite of all his charms, seems completely incapable of finding a girlfriend. The game is, by its nature, a negotiation, and because of the dating environment Woon-Cheol lives in his perspective has been warped to the point he can't see love from an intuitive perspective.

It's a film that benefits a lot from surprise plotting, since it's never really clear how or whether Woon-Cheol is ever going to find the happy ending he's looking for. The film isn't long enough for his character to undergo that much growth- which does a lot to add to the dramatic tension, since we definitely want him to succeed. It's just that his energy doesn't seem like it's enough.

Curiously, "One Perfect Day" isn't really a film about environment except in the subtextual sense, making its appearance alongside "Day Trip" in the Kolon Sport anniversary set a little strange. Its strengths are the opposite of that film, focusing on individual relatability, charming performances, and a very cute plot to entice the viewers. Both films have quite a bit of depth, just of different kinds. Still, whether as a double feature or separately, both are excellent short films. In spite of their commercial nature, I would rate them as some of the best I saw at PiFan this year. They are well worth watching.

"One Perfect Day" is directed by Kim Jee-woon and features Yoon Kye-sang and Park Shin-hye.