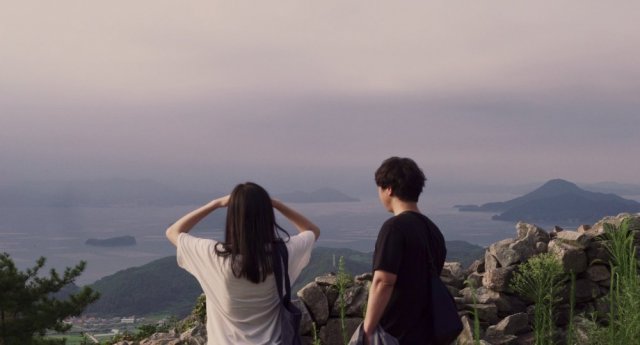 Seung-hee (played by Kim Yu-ra) is a quiet woman who has recently returned to the family farm on Geoje Island. There's minimal verbal explanation as to why she came back. We just see Seung-hee stew in mild annoyance as she's given instructions for chores. Seung-hee is similarly diffident to typical social interaction. At first glance it seems like Seung-hee has an attitude problem. But as the "Days in a Summer" pass by, we see that in reality, Seung-hee is just an introvert.

Something most movies don't get when they try to be about introverts is that introverts really hate talking to people. They're not neurotic, in a charming way or otherwise. They just prefer to be alone. So it is that writer/director Oh Jeung-suk favors long, unbroken shots of Seung-hee quietly appreciating the scenery. Sometimes it's with her grandmother, other times it's in archaic city streets, sometimes it's near a stone wall, and in the movie's most striking visual, it's on a date at the top of a hill with a magnificent view of the ocean.

Oh, about that date. For awhile it looks like "Days in a Summer" is going to be a romance, as Seung-hee starts hanging out with a fisherman played by Kim Rok-kyung. This man is never actually named in the script, because that's another detail introverts tend not to get hung up on. The closest the movie really gets to a plot is when Seung-hee is trying to learn how to fish. It's a hobby that's well-suited to her personality, and that's really all the motivation we get or need.

Instead the focus is on the subtle details, like how writer/director Oh Jeung-suk eschews close-up shots, obscuring Seung-hee's face as necessary. While this does no good for Kim Yu-ra's exposure as an actress, it emphasizes her introverted mindset and how she never feels like the focus of her own life. An early scene featuring Seung-hee and a friend at a social event with some tourists uses this concealment to excellent effect. Seung-hee quietly endures chatter that is fun to extroverts around her but meaningless to Seung-hee herself.

"Days in a Summer" also works powerfully as a travel movie about the value of getting away from it all. The visuals of Geoje Island are amazing, but more importantly, they're just visuals. Seung-hee doesn't grow as a person by talking with the quirky townspeople but rather by coming to peace with herself and understanding that she is solitary by nature and that's perfectly OK.

"Days in a Summer" is also a very effective demonstration of the appeal of fishing for someone who has never fished. Here it works more like a form of meditation. Seung-hee and the fisherman she hangs out with are less looking purpose and more looking for understanding. Seung-hee doesn't change much over "Days in a Summer" but she does find inner peace and this conclusion is heartwarming in ways far more sublime than what can be hoped for from a traditionally plotted story.

"[HanCinema's Film Review] "Days in a Summer""
by HanCinema is licensed under a Creative Commons Attribution-Share Alike 3.0 Unported License.